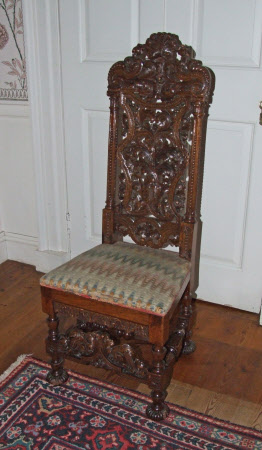 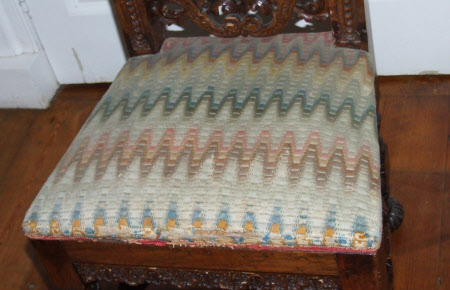 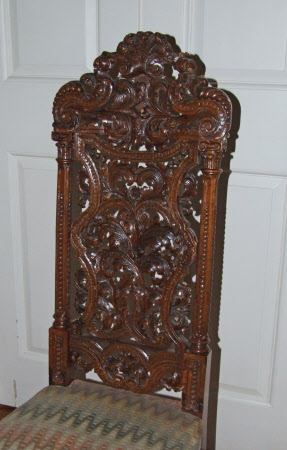 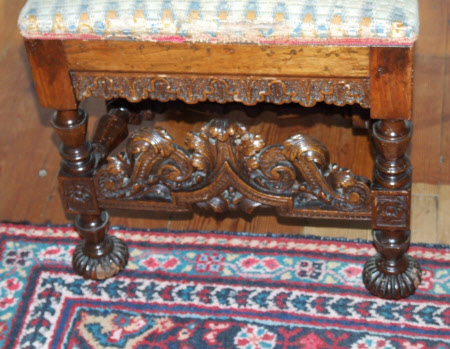 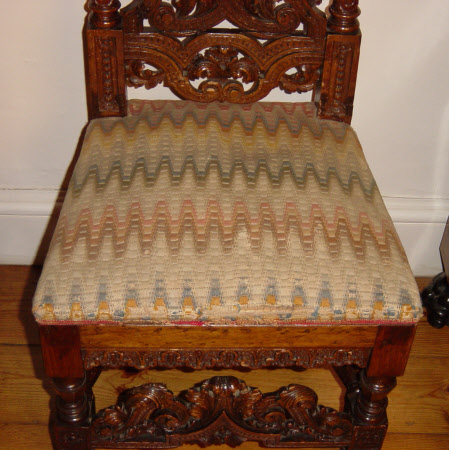 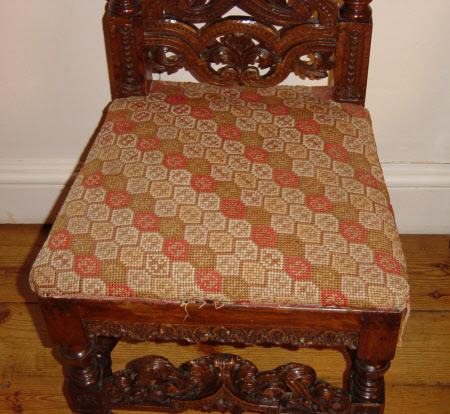 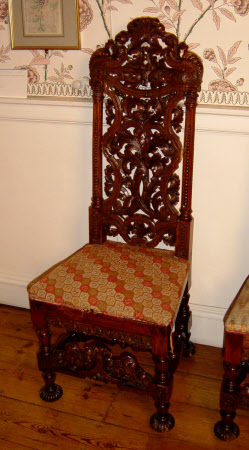 One of a set of four walnut high back side chairs, Netherlands, circa 1700, after designs by Daniel Marot (French 1661–1752). The back profusely carved and pierced with scrolling floral designs and flanked by beaded stop fluted column headed by ionic capitals, The crest above with conforming carved detail. The padded seat above turned and hexagonal faceted baluster legs tied by an H stretcher and with a front stretcher carved with further floral scrolls. Some restoration and alteration.

The design of the chair back is often associated with the drawings and designs of Daniel Marot. Daniel Marot (1661–1752) was a French Protestant, an architect, furniture designer and engraver. Born in Paris, he was a pupil of Jean Le Pautre and the son of Jean Marot, who was also an architect and engraver. Marot was working independently as an engraver from an early age, making engravings of designs by Jean Bérain, one of Louis XIV's official designers at the Manufacture des Gobelins. The family were Huguenots and were part of the wave of émigrés who left France in the year of the Edict of Fontainebleau and Revocation of the Edict of Nantes (1685) to settle in Holland. Daniel Marot brought the fully developed court style of Louis XIV to Holland, and later to London. In the Netherlands Marot was employed by the State General, who later became William III of England. In particular, he is associated with designing the interiors at the Palace of Het Loo, from 1684. We know from his own engraving that he designed the Great Hall of Audience for the State General at the Hague. He also decorated many Dutch country-houses. In 1694, he travelled with William to London, where he was appointed one of his architects and Master of Works. In England his activities appear to have been concentrated at Hampton Court Palace. Much of the furniture, especially the mirrors, guéridons and state beds in the new State Rooms designed for William at Hampton Court bear unmistakable traces of his authorship. After William's death Marot returned to Holland, in 1698, where he lived out his life. We owe much of our knowledge of his work to the folio volume of his furniture designs published in Amsterdam in 1712.