The Academicians of the Royal Academy (after Johann Zoffany RA) 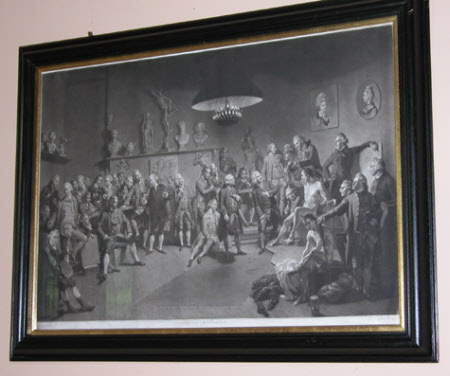 Print, mezzotint,The Academicians of the Royal Academy (after Johann Zoffany RA ) by Richard Earlom (London 1743 – London 1822). Large room crowded with founder members of the Royal Academy, focused on naked sitter positioned on a dais to right. His arm is held up in a pose by a man behind him. Another sitter is preparing to join the first one. Sand glass on the right to fore and artist to left fore. Two portraits on wall at right of two female academicians, Mary Moser and Angelica Kauffman. Busts and other sculpture around walls. Flaming candelabra in centre. 35 figures in total. Printed beneath the picture 'J Zoffany pinxit', 'Published August 1st 1773', 'R Sayer excudit'. R Earlom sculp'. Black frame, gilt slip, glazed.

Part of the Courtauld-Thomson bequest of 1943, and transferred from Dorneywood via Queen Anne's Gate to Blickling Hall in 1989.