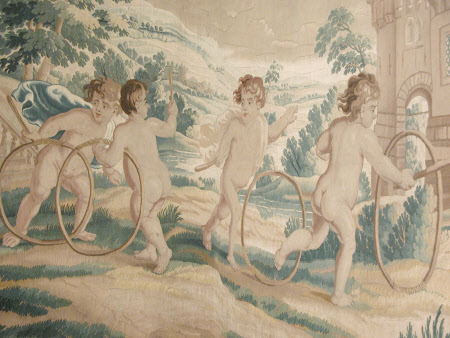 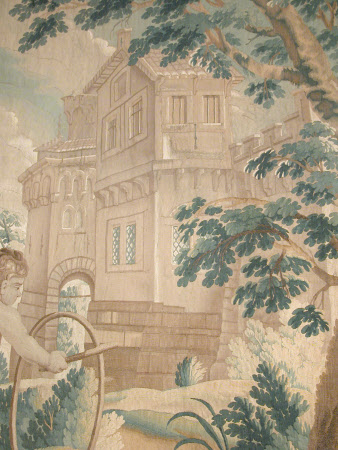 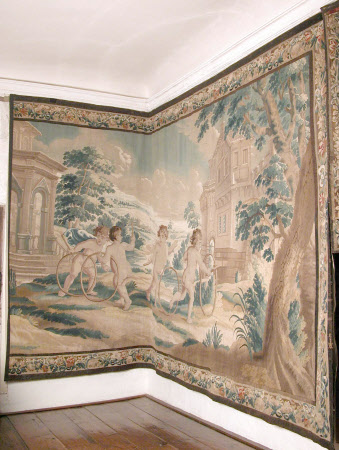 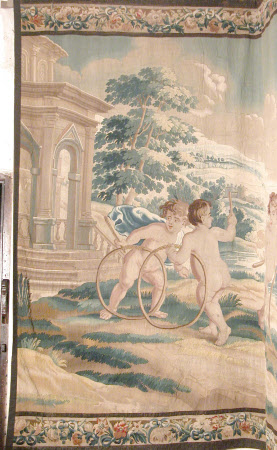 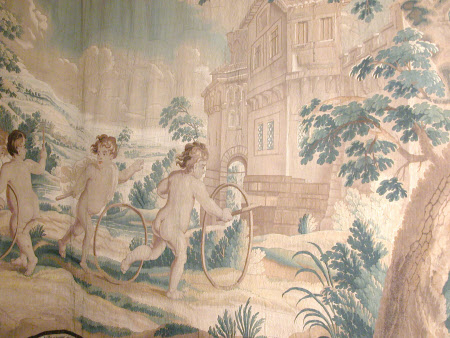 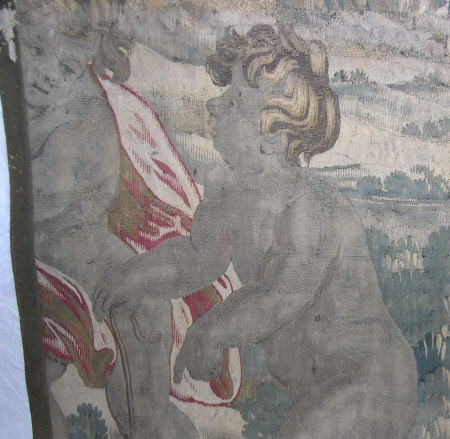 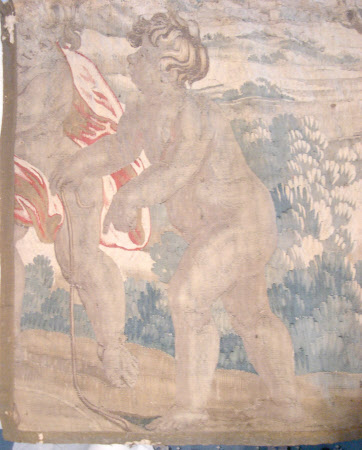 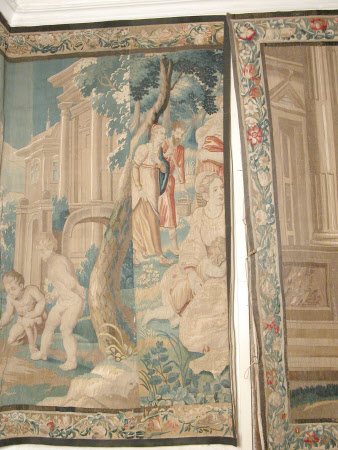 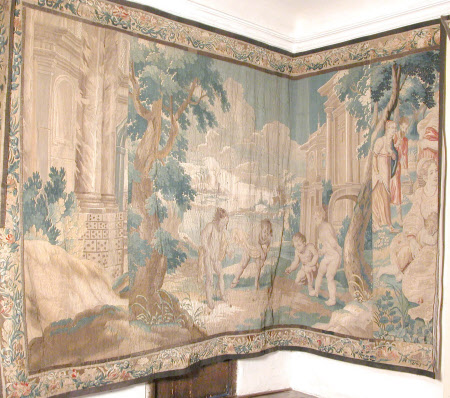 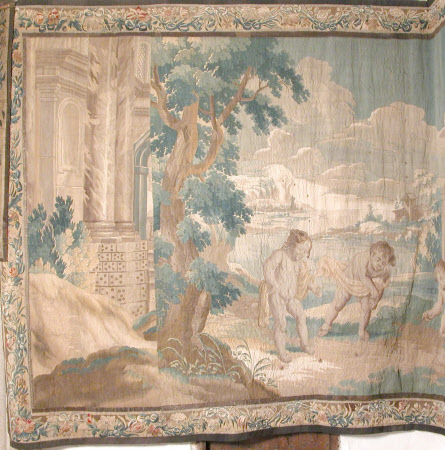 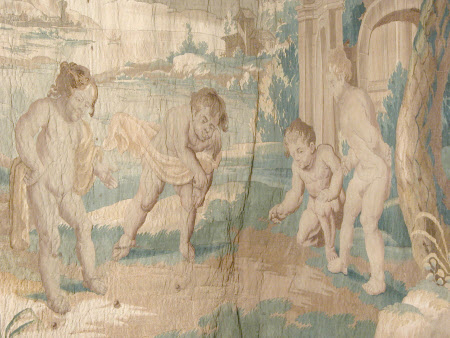 Sets of Children’s Games appear in paintings, prints and tapestries with great frequency in the sixteenth and seventeenth centuries. In many cases the representations of individual games relate to carnivalesque imagery, and can be traced back to medieval precedents. The games of children were increasingly invested with moralistic significance relating to the fleeting pleasures of childhood, and individual games could also carry specific meanings; this aspect of the genre was particularly prevalent in Netherlandish art, and reached its fullest expression in Dutch art of the seventeenth century. A parallel genre of Children's Games imagery emerged in the sixteenth century that was closely related to imagery of putti at play found on Roman sarcophagi and wall paintings, and popularised by Italian artists such as Polidoro da Caravaggio and various students of Raphael. The tapestries at Cotehele represent a marriage of the two traditions, the content and the serial nature of the set relating to the Medieval vernacular tradition, but the nude forms of the children referring to antiquity. Images of putti playing games appeared frequently as the main subject for tapestries in the early sixteenth century, and they also featured in the borders of tapestries with more serious historical or religious subjects. In the seventeenth century tapestry sets with playing children were woven in Italy, France, England and Flanders, and Children’s Games prints were produced by artists all over Europe (Davy-Notter and Mathias 1988). The four ‘Children’s Games’ tapestries at Cotehele are partly based on a set of prints called the ‘Verscheyde Aerdig Kinderspel’ (‘various pleasant children’s games’) designed by the Dutch artist Cornelis Holsteyn (1618-1658) (Mulherron and Wyld 2007). Holsteyn’s ‘Kinderspel’ provide the designs for the tapestries of ‘Marbles’ and ‘Fart-in-the-Face’, but no source has yet been found for ‘Hoops’ or ‘Whipping Tops’. It is quite probable however that these two scenes were also taken from prints, either by Cornelis Holsteyn (who is known to have designed at least three different sets with children playing) or another artist. Holsteyn’s ‘Kinderspel’ were widely used as design sources in a variety of media in the late seventeenth century, including painted tiles, popular prints and decorative paintings. The prints were also copied at least four times by other printmakers which substantially widened their circulation, and it is probable that the tapestries were actually made using one of these copy sets. Although the figures were taken in part at least from Holsteyn’s prints the overall conception of the set, and the completed tapestry designs, are the work of another artist, Abraham van Diepenbeeck (1596-1675). In the last two decades of his life Diepenbeeck produced at least 11 sets of tapestries, all but one of which were made for the brothers Michiel and Philip Wauters. In the correspondence of the Wauters firm we find a number of references to their sets of Children’s Games tapestries, including a letter dated 18 March 1676 to the dealers Alexander and William Fourchoudt in Vienna which describes “Children’s Games [Kinderspel], in a landscape with distant views and prospects. The children are designed by Diepenbeecque, as large as life, very curious” (quoted in Denucé 1931, p. 199). The practice of recycling figures from prints in tapestry designs was a common one, not just in Diepenbeeck's work (for example his ‘Riding School’ tapestry designs made for the Wauters brothers, which used figures from prints made Diepenbeeck himself for the Duke of Newcastle in 1658), but in the Flemish tapestry industry as a whole in this period. The ‘Children’s Games’ tapestries were produced in the workshop of Philip Wauters, whose monogram appears on the right-hand galloon of ‘Hoops’ (for the Wauters monogram see Crick-Kuntziger 1935). Philip and Michiel Wauters inherited their father’s tapestry business in 1660 and quickly became the largest tapestry producers in Antwerp, exporting their products throughout Europe. English clients seem to have been particularly fond of the Wauters’ tapestries, and large numbers of them survive in collections in this country – so much so that they were once thought to be English (Marillier 1930, passim). The records of the Wauters firm reveal the high popularity of their ‘Children’s Games’ tapestries, with sets exported to Paris, London, Vienna and Frankfurt (Denucé 1931; Denucé 1936, passim). In spite of the popularity of the ‘Children’s Games’ tapestries in the seventeenth century, the set at Cotehele is one of only two known to survive. A second version of ‘Marbles’ with a different background to the Cotehele version, and a fragment of ‘Whipping Tops’, larger than the fragment at Cotehele but still incomplete, is with the Italian art dealer Fiorini Antichità (Mulherron and Wyld 2007). They are not signed but are in borders that were commonly used by the Wauters. Small changes can be observed in the figures, mainly in details such as the hairstyles and drapery, and the landscape backgrounds are also different in the two versions. The three large panels have hung in the Red Room at Cotehele since at least c. 1840, when they appear in a watercolour by Nicholas Condy. In his accompanying description of the room the Rev. Arundell noted that “the principal subjects of [the tapestries] are the various amusements of boys, in a landscape” (Arundell 1840, p. 25). (Helen Wyld, 2010)

PW (the initials on the border of (a)