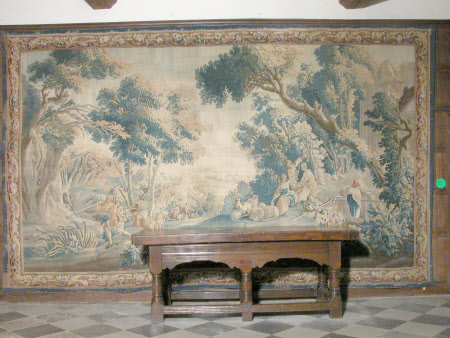 Tapestry, wool and silk, 4½ warps per cm. The warp count goes up to 6-7warps per cm in the faces of the figures

Tapestry, wool and silk, 4 ½ warps per cm, Washerwomen, Aubusson, after a design probably by Jacques-Nicolas Julliard, c. 1755 – 1775. A landscape tapestry with pastoral figures. On the left are two huntsmen at the side of a small pond or stream, one taking aim at a bird that flies across the water. Beyond the huntsmen is a landscape with a waterfall and trees, and the remains of a viaduct leading to a building on a rocky outcrop. A grassy meadow fills the centre of the tapestry. On the right is a wooded grove with three shepherdesses making garlands of flowers, a small flock of sheep sitting by them and a crook and bonnet lying nearby. Further to the right is a ruined fountain with a basin of water where a washerwoman lays out linen and a young man leans over a stone parapet to talk to her. The borders are composed of acanthus leaves winding around a central pole and interspersed with colourful flowers. On the lower galloon the tapestry is marked ‘M•R•D•B’. The faces of the figures are particularly fine with detailed weaving due to the insertion of additional warps in these areas. This is unusual, but not unknown, when weaving a coarser tapestry with small areas of detail. The warp count in these areas is 6-7warps per cm. the outer galloons are blue in colour. In the 1999 report the tapestry is described as from the set ‘Les Amusements de la Campagne’

The tapestry belongs to a loosely associated group of pastoral subjects woven at Aubusson in the second half of the eighteenth century, known as the ‘Amusements Champêtres’. The ‘Amusements Champêtres’ (Country Amusements) were originally designed by Jean-Baptiste Oudry for the Beauvais manufactory in 1728-30, and after c. 1750 the set was renewed and expanded at Aubusson. Oudry’s courtly figures were replaced by more earthy characters and a number of new subjects were added, their style clearly indebted to François Boucher. Raymond Novion identified around twenty subjects as part of the Aubusson ‘Amusements Champêtres’, and these designs have usually been attributed to Jean-Baptiste Huet or an artist in his circle (Novion 1975). More recently however Pascal Bertrand has shown that one of the Aubusson Amusements Champêtres, 'La Métairie' ('The Smallholding'), is in fact based on a painting by Jacques-Nicolas Julliard (1719-1790), a landscape painter and tapestry designer who was principal painter for the Aubusson and Felletin manufactures from 1755 until his death (Chevalier, Chevalier and Bertrand 1988, pp. 144-50). On stylistic grounds Bertrand has attributed the designs of four other tapestries in the series to Julliard, including 'Les Pêcheurs' (Fishermen) and 'Les Lavandières' (Washerwomen) (ibid.; Bertrand in Brosens 2008, pp. 304-8). The 'Amusements Champêtres' were produced by more than one workshop at Aubusson. Examples are recorded with the signatures of as many as six different weavers. The tapestry at Baddesley Clinton has no maker's signature, only the abbreviation ‘M•R•D•B’ for 'Manufacture Royale d'Aubusson'. A version of ‘Washerwomen' in a private collection is virtually identical to the tapestry at Baddesley Clinton but omits the two huntsmen (Chevalier, Chevalier and Bertrand 1988, p. 146). Another version of the design was part of a series of eight pieces in the de Bella sale in Paris in 1925 (Bertrand in Brosens 2008, p. 306). Within the National Trust's collection there is one other tapestry from the 'Amusements Champêtres' series, 'Blind Man's Buff' at Greenway (no. 119025). (Helen Wyld, 2011)