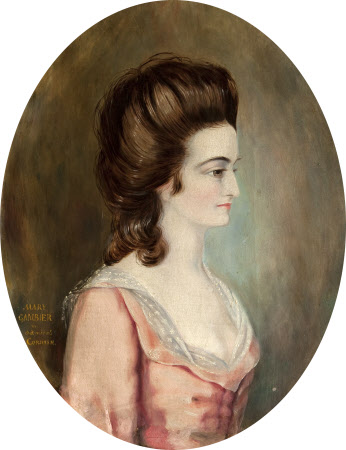 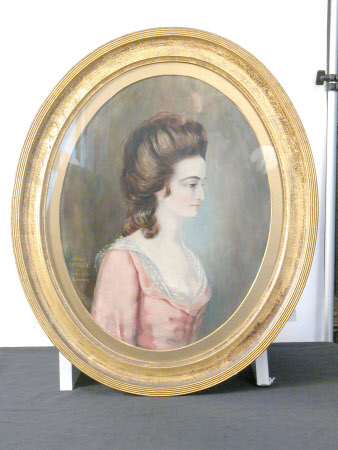 Oil painting on canvas (oval), Mary Gambier, Mrs Samuel Pitchford Cornish (b.1753), by Rebecca Dulcibella Orpen Ferrers, later Mrs Edward Henege Dering (1830 – 1923), after a painting or miniature of circa 1780/85. An oval, head-and-shoulders portrait of the sitter viewed in profile facing right. She wears a pink dress with a trimming of white lace around the low neckline. Her brown hair is dressed high onto her head and falls in ringlets into her neck. Mary Gambier was the wife of Samuel Pitchford Cornish, Vice Admiral of the Red in the Royal Navy, and the aunt of Georgiana, Lady Chatterton. Inscribed. There is a copy of this, BAD/P/90 in store. Daughter of John Gambier (1723-1782), Lieut-Governor of the Bahamas and sister of Cornish Gambier. Married Samuel Pitchford Cornish (1739-1816), Admiral of the Red.