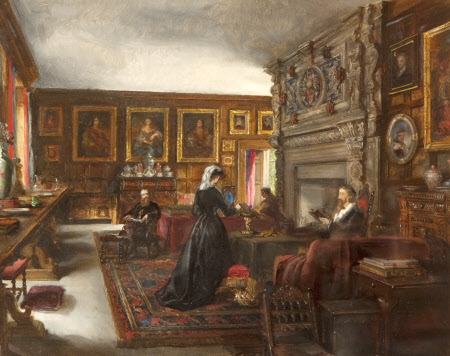 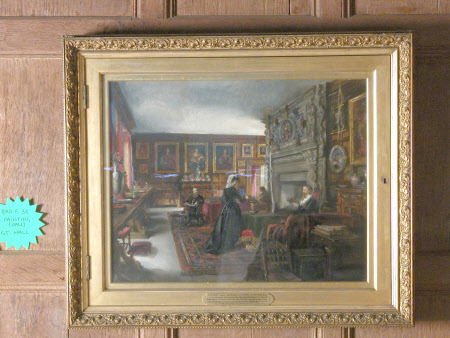 Rebecca Orpen was a talented amateur artist who married Marmion Edward Ferrers (1813-84) of Baddesley Clinton. She was prolific, working in both oil and watercolour, and much of her work remains in the house today. She and her husband lived at Baddesley with her aunt, Lady Chatterton and her husband, Edward Heneage Dering. They became known as ‘The Quartet’, revelling in art, history and their religion. On the death of their spouses, Rebecca and Edward Dering were married. Either side of the chimneypiece Marmion Ferrers and Georgiana Chatterton are both seated. The artist stands in the centre, in her riding habit, arranging flowers in a vase. Beyond her, Edward Dering is shown with a book in his lap. These pursuits would have been typical of a group which so valued the pursuits of the past.

Oil painting on panel, The Great Hall of Baddesley Clinton, with Mr and Mrs Marmion Ferrers, Mr Edward Heneage Dering and Georgiana, Lady Chatterton (Mrs Dering), by Rebecca Dulcibella Ferrers Orpen, later Mrs Edward Dering (1830-1923), 1870. A view of the hall with the ornate, floor-to-ceiling marble chimneypiece on the right. To either side of it are seated (left) Henrietta Georgiana Marcia Lascelles Iremonger, Lady Chatterton (1806-1876) and (right) Marmion Edward Ferrers (1813-1884). Standing at the centre of the group, her back to the spectator and wearing a long black silk dress, is Rebecca Dulcibella Orpen, the artist. To her left, seated at the far end of the room, is Edward Heneage Dering (1826-1892) who holds an open book on his lap and looks across in her direction. The panelled walls of the room are hung with portraits, including that of Lady Chatterton as painted by Rebecca Orpen (See 343141) which hangs to the right of the fireplace. Henrietta Georgiana Marcia Iremonger was the daughter of Reverend Lascelles Iremonger. She married, (i) Sir William Abraham Chatterton, 2nd Bt., (1794-1855) son of Sir James Chatterton, 1st Bt. and Rebecca Lane, on 3 August 1824. and (ii) Edward Heneage Dering, (1826-1892) son of Reverend Cholmeley Edward John Dering, on 1 June 1859. She died on 6 February 1876. Marmion Edward Ferrers was the son of Edward Ferrers (1790-1830) and Lady Harriet Townshend (d.1845) the daughter of George Townshend, 16th Baron Ferrers of Chartley, 2nd Marquess Townshend and Earl of Leicester of Tamworth Castle; married Rebecca Dulcibella Orpen (1830-1923) as her first husband. Edward Heneage Dering built the service wing at Baddesley Clinton. Married (i) in 1859, Georgiana, Lady Chatterton (1806-1876) the widow of Sir William Chatterton (1794-1855) and (ii) in 1885, Rebecca Dulcibella Orpen, Mrs Marmion Edward Ferrers (1830-1923) The life of the four friends, known to each other as 'The Quartet' and their obsessive interest in the history of the house, is attested by the numerous paintings of them which were done by Dulcibella. After Marmion Edward's death, in 1885 she married Edward Dering, by then a widower.