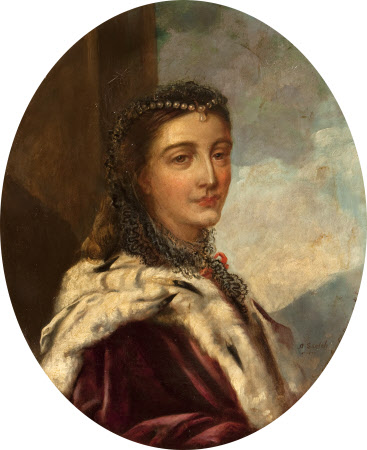 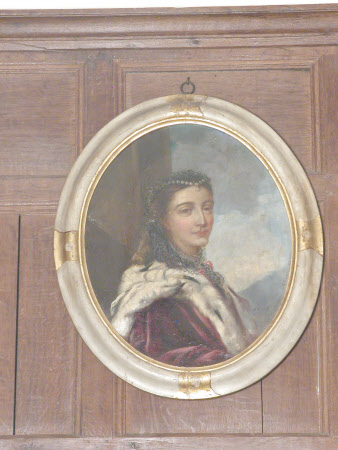 Rebecca Orpen was a talented amateur artist who married Marmion Edward Ferrers (1813-84) of Baddesley Clinton. She was prolific, working in both oil and watercolour, and much of her work remains in the house today. She and her husband lived at Baddesley with her aunt, Lady Chatterton and her husband, Edward Heneage Dering. They became known as ‘The Quartet’, revelling in art, history and their religion. On the death of their spouses, Rebecca and Edward Dering were married. Georgiana was the daughter of the Rev. Lascelles Iremonger. She married firstly Sir William Chatterton 2nd Bt. (1794-1855). Her second marriage, in 1859, was to Edward Dering.

Oil painting on panel (oval), Henrietta Georgiana Marcia Lascelles Iremonger, Lady Chatterton (1806–1876), seated in an interior at Baddesley Clinton, by Rebecca Dulcibella Orpen (1830 – 1923), inscribed and signed: RD Ferrers. A head-and-shoulders portrait of the artist's neice, turned towards the right, her head facing the spectator but looking out towards the right. Her hair is dressed with a string of pearls and lace mantilla. She wears a red velvet cloak trimmed with ermine around her shoulders. There is a building in the background to the left and a landscape with a cloudy sky to the right. Henrietta Georgiana Marcia Iremonger was the daughter of Reverend Lascelles Iremonger. She married firstly Sir William Abraham Chatterton, 2nd Bt (1794-1855), son of Sir James Chatterton, 1st Bt and Rebecca Lane, on 3 August 1824 and, secondly, Edward Heneage Dering (1826-1892), son of Reverend Cholmeley Edward John Dering, on 1 June 1859. She died on 6 February 1876.