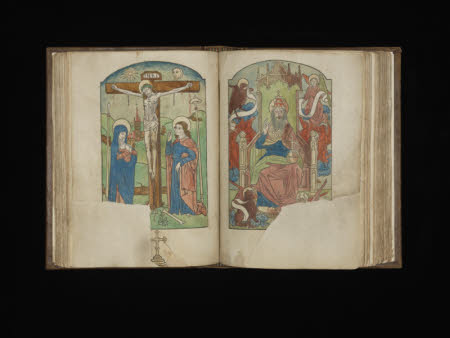 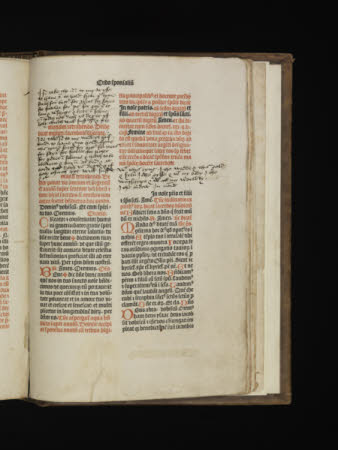 Dating from 1487, this is one of the earliest printed books in the National Trust’s collections. As a Roman Catholic prayer book, it provides a fascinating insight into religious practice in England before the Reformation and the establishment of the Protestant faith. Published by William Caxton (d.1492), England’s first printer, it appears to have been printed in Paris to produce red and black type. The book was probably acquired by Sir Piers Legh (1455–1527), the founder of the chantry chapel at Lyme in Cheshire, and was in use at the house at least from 1503 and possibly before. Its many hundreds of pages of Latin text show signs of use as an active working tool of religious life and practice. These include pen-and-ink annotations and additions to bring it up to date following the Reformation, and the removal of references to popes and martyrs, including Thomas Becket, by order of Henry VIII. The continued use of the Missal over centuries demonstrates how Christians adapted to religious change while retaining vestiges of past traditions. It remains an amazing survival, and the example at Lyme is the only known substantially complete copy in existence.

The Lyme Missal – so called because it contains the text of the Sarum Missal, a pre-Reformation church service developed at Salisbury Cathedral – is arguably the National Trust’s most important printed book. Few other books can match the volume’s 500 year association with a property and its family, or its significance in the history of English printing. Although William Caxton was the first printer to operate in England, his role in the production of the 1487 Missal was more akin to that of publisher. The technicalities of producing the text, particularly the printing in both red and black, could only be achieved by printers on the Continent so Caxton commissioned the work from the Parisian printer, Guillaume Maynial. On their return to Westminster, Caxton added his woodcut device to the freshly-printed books – the first known use of this now-famous symbol. In addition to being the only near-complete copy of the 1487 Missal, it is also the only Caxton book remaining in the National Trust’s collections; many others, including those formerly at Osterley, Ham House, Blickling and Peckover House, were sold in the first half of the twentieth century.

[262] leaves . fol.. Imperfect: wants leaves *1,2,4,5,7,8, a1, a10, b1-8, c1,2, n3-6 [i.e. 22 leaves according to Hellinga's collation]. Many leaves damaged at foot, removing signatures and text; illuminated? initial cut out on a2r. Some manuscript initials in blue. The full-page illustrations on m8 & n1 are hand-coloured, but imperfect. The English portion of the marriage service on E8r is written in by hand. Numerous annotations, including "in a sixteenth-century hand contemptuous references to Richard Mody who was rector of Standish nr Wigan during the reign of Queen Mary I" (de Ricci). Extensive annotations on G6v, giving instructions for the service of St. Thomas of Canterbury. References to the Pope deleted on k7r and G5r. Exhibited at the Caxton Exhibition, [London] 1877 'Class A. 128' & the Ecclesiastical Art Exhibition [Manchester, 1888?] '280' (labels on front pastedown). Nineteenth-century collation notes, including manuscript slips pasted in place of missing leaves. Letter from W.B. Rye at the British Museum (1873-12-31) and typescript of articles by William Blades & Edward Scott inserted at rear pastedown, along with two typescript exhibition labels. . Binding: Nineteenth-century binding, incorporating front panel from original? late fifteenth or early sixteenth-century blind-stamped (stamps of roses, some with fleur-de-lys) diaper calf binding. Old repairs to many pages.

Probably acquired directly from Caxton by Sir Piers Legh of Lyme (c 1455–1527) either on publication or shortly after and then by descent in the Legh family at Newton or Lyme. Deposited by Lord Newton at John Rylands (and so recorded in ISTC). Acquired by private treaty in 2008 with the help of grants from the National Lottery Heritage Fund, the Foyle Foundation, the Pilgrim Trust, the Friends of the National Libraries, the Art Fund, the Robert Gavron Charitable Trust, the Royal Oak Foundation and private individuals