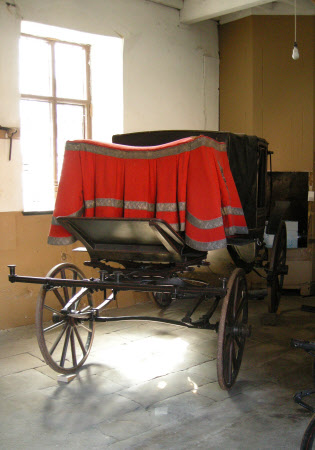 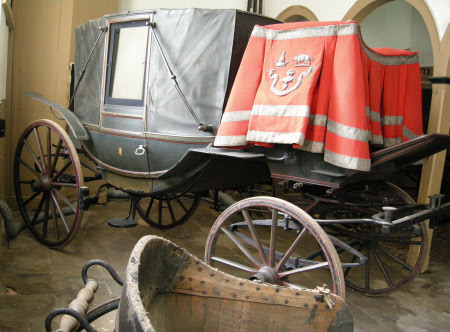 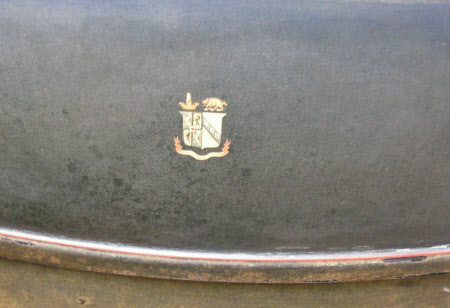 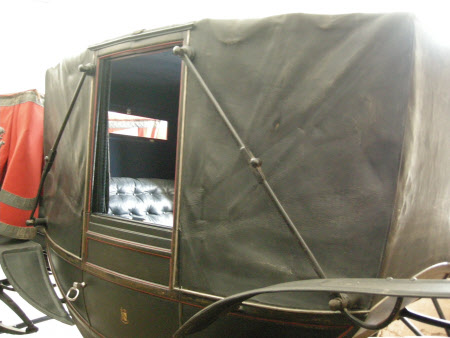 Landaus were a versatile carriage that could be used in all weather. The leather hood could be folded down on a fine day allowing the passengers to admire the views and take the air. During inclement weather the hood fastened up would create a closed carriage protecting the passengers. Landaus come in a number of styles, this example is known as a Sefton Landau, a name given to a lightweight version enabling just one horse to pull the carriage.

Sefton Landau by Holmes of Derby. Sefton Landau (four wheels) for a single or pair of horses. The body of this carriage is sprung on elliptic springs. It has a folding leather head with silvered catches. The two doors have silvered loop handles . The coachman's seat has a cushion upholstered with dark blue woollen cloth. An interior of black leather buttoned upholstery with two seat cushions behind and a single wide cushion in front and ivory furniture. Painted dark blue livery with red lining, the family coat of arms painted on the doors.

At the start of the nineteenth century landaus were big heavy carriages, open versions of the contemporary coaches. Later in the century, when many more people could afford to own carriages, everyday carriages became smaller and lighter. A successful professional family who could afford to employ a coachman would very likely own a brougham, a closed carriage for bad weather and night-time use, and a victoria, an open carriage for use in fine weather. This was an ideal combination but, if they owned a landau, they only needed one carriage for both uses because, with the head raised, it was a closed four seat carriage, but it could be quickly and easily converted to an open carriage simply by lowering the head. Several different styles of everyday landaus were developed. The canoe landau was obviously so named because it has a canoe-shaped body. If a canoe-bodied landau was so small that it could be pulled by one horse it was called a Sefton landau, after the Earl of Sefton for whom the first one was built, and it was considered a breakthrough for a landau to be so small at that time. If the body had an angular profile and a deep foot well it was called a Shelburne landau, after the Earl of Shelburne who had the first of that pattern built. Early landaus had head joints, the hinged stays visible outside the leather of the head, which kept it tightly stretched, but a servant had to get down to raise or lower the head. Many types of head lifts were later developed, spring-assisted mechanisms that were fitted between the head leather and the fabric head cloth ‘which facilitate the closing and opening of the heads, almost as simple in action as the opening or closing of an umbrella or a parasol’ as the celebrated carriage builder G. N. Hooper wrote in 1890. This carriage is a conventional but very good canoe-bodied landau which can correctly be called a Sefton landau because it is small enough and light enough to be pulled by a single horse.