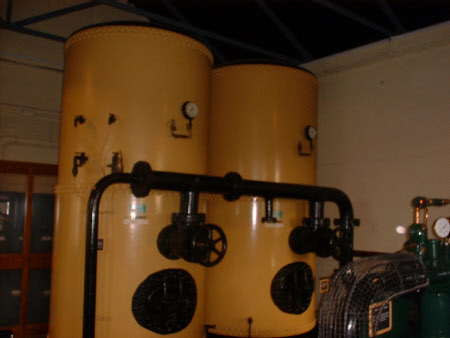 Souter and the Leas, Tyne and Wear

Air tank to hold compressed air for the fog horn. The air is contained at a pressure of 60 pounds to the square inch. Fawn painted with a black concave top. On the southern side of the tank is a drainage tap. Below the tap is a bucket (SLH.M.101 or SLH.M.102). Also on the south side is an out pipe, which allowed the compressed air to flow down the pipe to the Fog Horn House. The valve in the pipe is controlled by a large wheel. The tank is rivetted, which suggests that it dates from before 1930, as welded tanks were introduced then. It could be possible that the tank was specially ordered when the Fog Horn House was rebuilt in 1935. Similar to SLH.M.117.