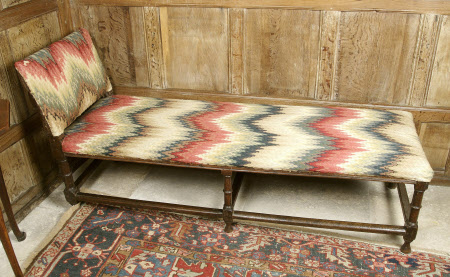 Late 17th century oak daybed covered with bargello needlework. The frame, of pegged construction, comprises seat rails and stretchers of squared section with a simple linear moulding supported on column-turned legs with a decorative ring ('astragal') mid column. A sequence of notches allows adjustment of the peg-hinged back to two positions. The day bed is now covered in Lister Bargello needlework. Couches for daytime use here are referred to and occasionally illustrated in Medieval illuminated manuscripts, the term Day Bed being considered familiar enough for Shakespeare to use it without explanation for e.g. in Twelfth Night 1600, although purpose-built Day Beds themselves would then have been rare outside courtly life. Survivals from the period are merely long upholstered seats with a raised 'back' of panelled wood at one or both ends. A sophistication of the type, with an actual back and ends adjustable with ratchets, all upholstered, was introduced from the Court of Louis XIII c1630. With the Restoration a more popularly affordable style appears, the decorative form of its initially simple framing closely following the evolution of contemporary chairs.