Six of the Duke of Newcastle’s Manège Horses 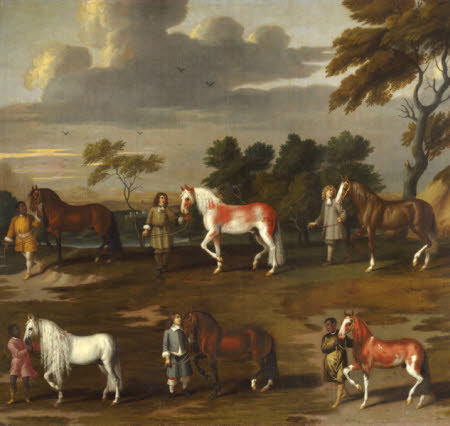 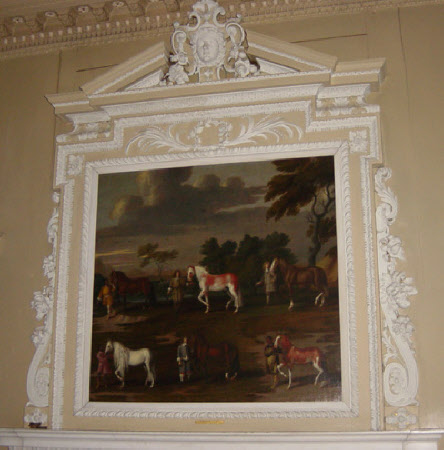 This painting appears to be Netherlandish of around 1650 – 70 to judge by the costumes of the grooms and the style. Some of the horses have been identified as Machomilia, un Turke, ‘Rubecan, un Roussin’, Paragon, un Barbe and ‘Le Superbe, cheval de Spanie’. William Cavendish, 1st Duke of Newcastle-upon-Tyne (1592 - 1676) published a book on the management of horses called 'La Méthode Nouvelle et Invention Extraordinaire de Dresser les Chevaux' which was first published in Antwerp in 1658 with a different book of the same title appearing in English in 1677. The volume contains forty plates by various engravers after drawings by Abraham van Diepenbeck (1596-1675), a Flemish artist and associate of Rubens, who is said to have worked for Cavendish in England during the reign of Charles I. There is a comparable group of paintings at the Duke's old seat at Welbeck Abbey, Nottinghamshire deriving from the same publication. One of which is signed A. Sijmons f. but who is probably not the same as the English wax modeller and medallist, Abraham Symons or Symonds (1617–1692).

Spink & Sons, London, as by Diepenbeck, (according to an undated illustration in the Witt Library), from whom doubtless acquired by Captain (d.1943) or Mrs Bambridge, at a date unknown; bequeathed to the National Trust together with Wimpole Hall, all its contents and an estate of 3,000 acres by Elsie Kipling, Mrs Bambridge (1896–1976)