Proposal for the remodelling of the north (?) and south fronts of Wimpole Hall, Cambridgeshire 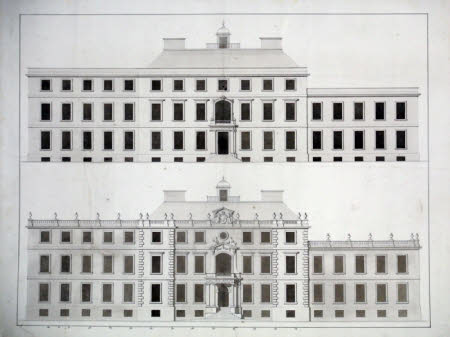 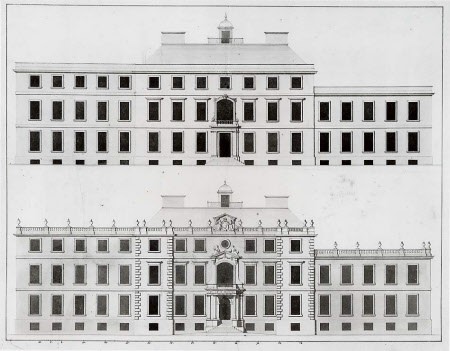 Pen and ink, with grey wash

Amongst the drawings for which Gibbs received payment on 17 May 1721 were: 'two fronts for Wimpol [sic] £8.8.0', and two Fronts for Wimpol more carefully drawn than the first £10.10.0.'. These were clearly his alternative proposals for the remodelling of the entrance (or south) and garden (or north) fronts of Chicheley's house, and the addition of two-storied flanking wings of five bays each to east and west. Two of the 'fronts', or perhaps alternatives for the same one, are presented together in this drawing - the proposal for what may be the north elevation placed at the top of the sheet - while the other two were drawn on separate separate sheets[1]. Gibbs's proposals for the south front were fairly conservative and his intention was clearly that much of the fabric of the earlier house should be preserved. The projecting, single bay 'towers' to either end of Chicheley's house were to be retained and extended upwards to form a full attic storey. The triangular pediments to the first-floor windows were to be removed and the windows heightened. The central, projecting bay was to be scraped back to the plane of the main build, and the existing 'mannerist' doorway, window and gabled aedicule replaced by a Doric porch, a pedimented window carrying reclining sculptural figures, and above that a pedimented cartouche displaying Oxford's supporters and coat-of-arms. Alternative proposals for the wings are shown, with and without the attic storev of the central block, which lends the drawing a curious, unbalanced appearance comparable to the bizarre effect of the several decorative alternatives often offered in furniture pattern books. A balustrade carrying urns serves to unify the old and proposed work and to mask the lower part of the hipped roof. The improvements, the recasting of the central lantern, and the truncation of the chimney-stacks would together have had the effect of reducing the old-fashioned verticality of the house. Top half: This, perhaps a proposal for the north front, is uncharacteristically austere, the only ornament being the mask and flanking cornucopia above the central, segmentally headed window on the first floor. It may, alternatively, be for a more radical refacing of the south front along the lines later effected by Henry Flitcroft. [1] David Adshead, Wimpole Architectural drawings and topographical views, The National Trust, 2007, pp.21 - 22, nos. 9 - 10 Catalogue entry adapted from David Adshead, Wimpole Architectural drawings and topographical views, The National Trust, 2007