Drawing for an octagonal garden pavilion, elevation and plan, at Wimpole, Cambridgeshire 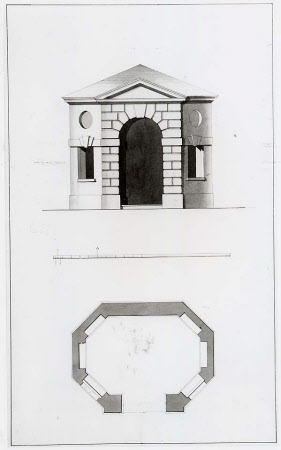 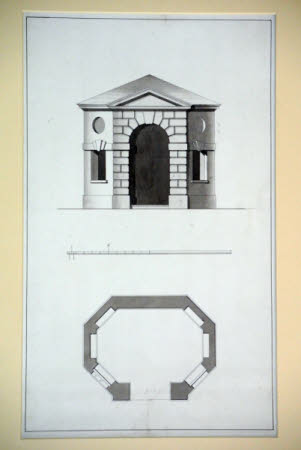 On 24 July 1719 Gibbs was paid for 'Four drawings for summer houses 06. 06. 0', and, on 17 May 1721, for 'Two summer houses with the Roofe in large 03. 03. 0'. This drawing may be one of the former. None of Bridgeman's drawings of the gardens record the building which Sir John Clerk of Penicuik (1684- 1755) in 1727 described, reservedly, as 'a neat summerhouse painted by Sir James Thornhill a man of great invention rather than correct design'; and which Sir Matthew Decker wrote of more favourably in th.e following year: 'At the end, a Bowling green, with a fine summer house in one of the corners. This, inside, as also the Chappel in the house, are painted, and the best that I ever saw done by Sir James Thornhill'. It is not clear why both accounts mention only one building for in 1728 Jacques Fougereau notes that the garden 'est termine par un grand boulingrin, avec deux pavilions peints et fort propres en dedans, qui bornent Ia terrasse de bout'. The diarist's accompanying sketch plan[1] clearly shows a rectangular, hipped-roofed pavilion on either side of an octagonal bowling green. This is exactly the arrangement recorded in Robert Greening's proposals for a walled garden (NT 206197 & NT 206198) of c.1752. Sadly the mysterious 'Mr S', perhaps the poet William Shenstone (1714-63), recommended in his 'Hints [...] about Alteration s in the Garden' that the summer houses 'shd. be pulled down' The buildings described in the above accounts and drawings are undoubtedly pavilions designed by Gibbs. A number of examples, both generic and specific, of garden pavilions and summer houses of various plan forms-square, octagonal ,and circular-and roof configurations, often domed, is illustrated in his Book of Architecture; and a number of these were associated, as at Down Hall, Essex and Gubbins, Hertfordshire, with bowling greens. This octagonal example, whose canted windows wouJd have afforded views of the bowling green to the south, is presumably a preliminary proposal. An alternative reading of this drawing might be entertained; that it is a later proposal by Henry Flitcroft. Not only is the scale-bar more like those employed by Flitcroft, but the shading of the pavilion roof-fading from ridgeline down, as was John Webb's practice, and Vincenzo Scamozzi's before him-is similar in style to that used in the architect's drawings of the Hall and church at Wimpole. David Adshead, Wimpole Architectural drawings and topographical views, The National Trust, 2007, p.35, no. 42 Catalogue entry adapted from David Adshead, Wimpole Architectural drawings and topographical views, The National Trust, 2007