Proposal for the gardens and park to the north and west of the house at Wimpole, Cambridgeshire 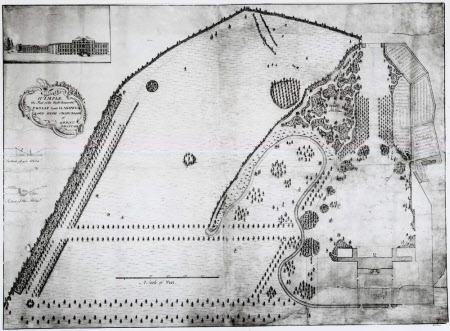 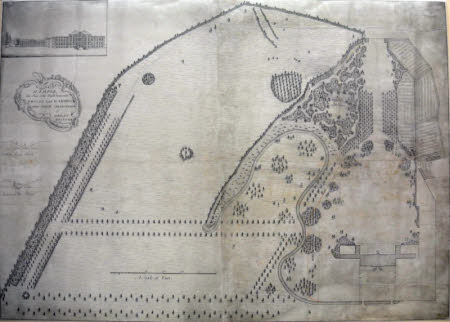 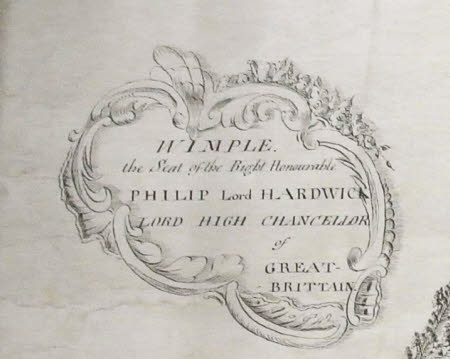 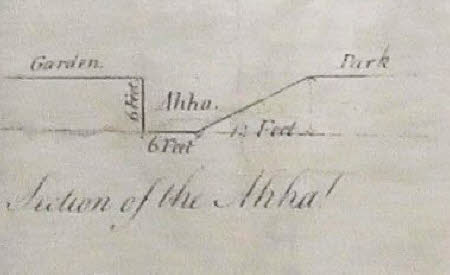 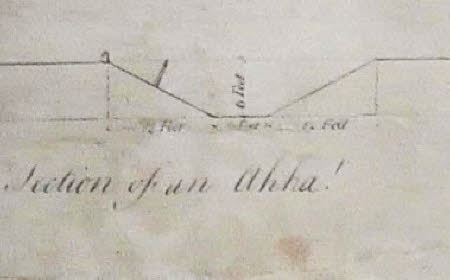 Robert Greening (d.1758). Proposal for the gardens and park to the north and west of the house, c.1752, inscribed, within a rococo cartouche, 'Wimple the Seat of the Right Honourable Philip Lord Hardwick [sic] Lord High Chancellor of Great Brittain'; two, dimensioned marginal drawings marked 'Section of an Ahha!' and 'Section of the Ahha!', pen and ink (680 x 950mm), scale given.

The complicated proposals set out in this drawing appear to have been undertaken only in part. While the clearing of the parterres to the north of the house and the thinning of the surrounding planting to form clumps was effected, there is no evidence that the area to the north-west with its sinuous island-beds arranged around an oriental kiosk or pavilion was created. In the late 1740s 'Robert Greening and Company' had planted up Smith's Lawn at Cumberland Lodge, Windsor Great Park in a similar way. The contrived irregularity of the Wimpole scheme, particularly the proposed layout to the north-west is reminiscent of the Rococo garden designs published by Batty Langley (1696-1751). The Lord Chancellor would have had access to expert advice on chinoiserie from a number of possible sources: Sanderson Miller was probably responsible for supervising the construction of a number of Chinese buildings in the 1740s and 1750s on the estate of Frederick North, later 2nd Earl of Guilford (1732-92), at Wroxton Park, Oxfordshire; while the Lord Chancellor's son-in-law, George, Lord Anson (1697- 1762) - who had travelled to China - had built a Chinese house on his brother's estate at Shugborough, Staffordshire, in 1748. Anson could have advised on the authenticity of any proposed Chinese building. Jemima, Marchioness Grey, the Lord Chancellor 's daughter-in-law had also visited, and described in her journal the Chinese pavilions at Studley Royal, Stowe, Wroxton and Shugborough. Philip Yorke and Jemima Marchioness Grey built a Chinese pavilion at Wrest Park in 1761, three years before they were to inherit the Wimpole estate, but in the absence of any further documentation about the Wimpole pavilion, it may be assumed that Greening's design was never built. At the top left of the drawing is a small vignette of Wimpole Hall, viewed from the south-west – an uncomfortable perspective, naively assembled from elevations of the main block and the late-seventeenth-century orangery. The south front of the main block is shown as re-faced by Henry Flitcroft, and James Gibbs's gallery extension is shown connecting with the orangery-its easternmost two bays adapted to take the windows of Gibbs's library ante-room. The newly built ice-house, perhaps to designs by Henry Flitcroft (Plan and section for a thatched ice house - British Library Add. Ms. 36278 M.3') may be the igloo-like structure shown in the circular clump of trees at top-left, the northern end of the 'Fir Walk'. Catalogue entry adapted from David Adshead, Wimpole Architectural drawings and topographical views, The National Trust, 2007