Proposal for a Walled Kitchen Garden to the North-West of the House at Wimpole, Cambridgeshire 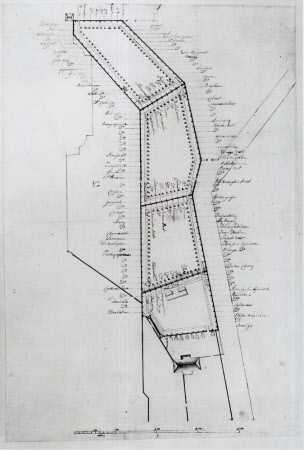 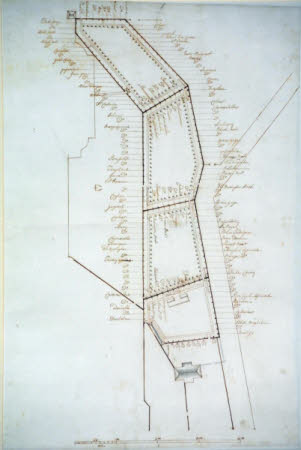 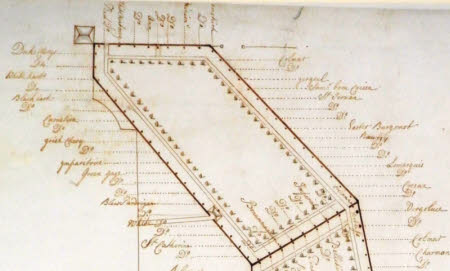 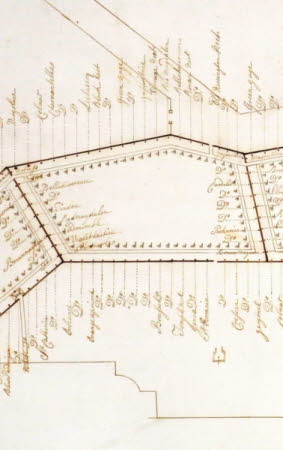 Robert Greening (d.1758). Proposal for a walled kitchen garden to the north-west of the house, c.1752, inscribed with the names of the different species of wall fruit, pen and ink (535 x 360mm), scale given.

This smaller scaled drawing provides detailed planting proposals for the walled kitchen garden. The unconventional plan form of this enclosure, elongated and ‘cranked’, was generated by the eastern shoulder of the earlier formal gardens, and the line of a track which formed its eastern boundary. The great medieval, hipped-roof barn with its opposed porches (unusual in barns before c.1750), illustrated in Kip’s view (NT 206324), is recorded here at the southern end of the new kitchen garden; while the easternmost of James Gibbs’s pair of garden pavilions is shown at its northern end. Running south from the pavilion can be seen the scalloped and checked western edge of the bosky planting that flanked the bowling green and whose shape is recorded in Jacques Fougereau’s 1728 sketch[1]. In his wider proposals for the gardens to the north of the house (NT 206200 and NT 206197), Greening made use of this existing tree planting, but loosened and thinned it. The walled garden is divided into five ‘slips’ by cross walls running at a variety of angles, that provide a series of short, valuable south-facing walls against which particularly tender plants could be grown. But different species of fruit trees, more than 200 in all, are indicated against the inner faces of all the walls - apricots, cherries, figs, greengages, and peaches. The exception is the second slip from the south. Here against the northern wall, which is drawn at twice the thickness to the other cross-wall, the legend reads ‘All Vines’. This thicker wall presumably contained a system of heating flues and must be the one that Greening refers to in his instructions of September 1752: ‘Make a lattice to Tye the Vines against to put up before the Hot Wall’. The Greening family had similarly built heated walls in the gardens at Claremont, Surrey where they were referred to as ‘fire’ walls. The instruction in the same document ‘Get Tan as soon as possible for the shifting of the Pine apple plants’ is intriguing. These valuable fruits may previously have been been grown in what appear to be lean-to glasshouses shown to the south-west of the house in Kip’s view. Perhaps they were destined for the building that is shown in this immediately to the south of the vine wall. Might it be possible that Flitcroft designed this building in partnership with Greening? When the two men worked together in Windsor Great Park, Flitcroft designed, c.1748, a hothouse range for Cumberland Lodge. Greening’s kitchen garden may have lasted less than twenty years and been swept away as part of Brown’s landscaping works – certainly there is no sign of its walls on an anonymous estate survey drawing of the early 1770’s (NT 206297). The lines of the garden’s boundary and cross-walls can be seen from the air and on the ground when conditions are favourable. These slight garden earthworks were recorded by the RCHME in 1997 and 1998. Catalogue entry adapted from David Adshead, Wimpole Architectural drawings and topographical views, The National Trust, 2007 [1] David Adshead, Wimpole architectural drawings and topographical views, The National Trust, 2007, p. 35, no. 42.

Alongside the 'walls': Inscribed with the names of the different species of wall fruit