Perspective drawing for the folly at Wimpole, Cambridgeshire 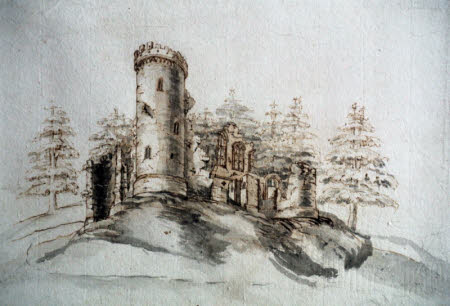 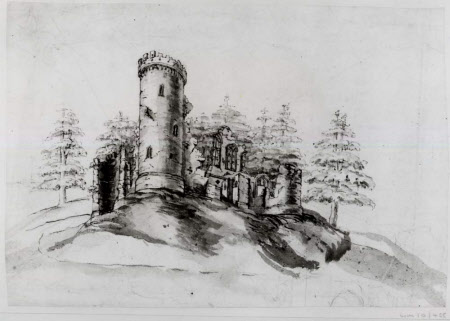 Pen and sepia ink with grey wash over pencil

Although their final interpretation would be different, all the essential ingredients of Wimpole's sham ruins are embodied within this drawing - the general form of the ruin's central tower, the artfully slighted curtain wall which links it to the two smaller bastions to the north-east and north-west, and the use of large, traceried windows. This is an accomplished perspective drawing rendered convincingly in light and shade, and clearly made for the purpose of presentation. The pencil set-up lines, showing the station and vanishing points, are clearly visible, while the geometry of the hidden base of each tower has been indicated with dotted lines. Although different in type to the elevation drawings, the similarity between the structure of the fir trees in this perspective rendering and those sketched in drawing 'b' (NT 206194) suggest that they are by the same hand. Miller was taught perspective drawing by Sir Roger Newdigate (1719-1806), in exchange for a lesson on gothic arches, and when occasion demanded he was capable of producing competent drawings. Just as in the built version, where a wall pierced by a large traceried window (as if lighting a chapel, or great hall) lies within the encircling curtain, Miller here draws a wall, inside the castle, which contains the remnants of three windows. In front of this, the castle wall is interrupted by the remains of another structure, square in plan, that was perhaps supposed to be a gatehouse or porter's lodge. A slight pencil sketch in perspective of an arch within a section of walling appears at the bottom right of the sheet. Catalogue entry adapted from David Adshead, Wimpole Architectural drawings and topographical views, The National Trust, 2007