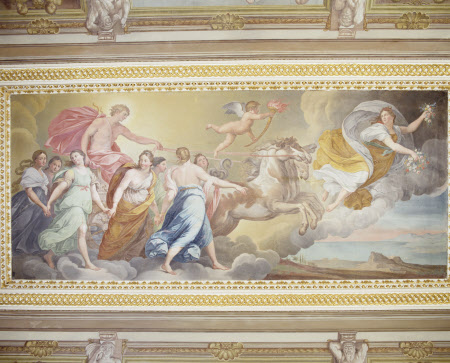 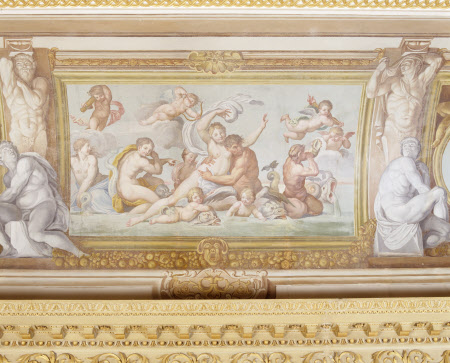 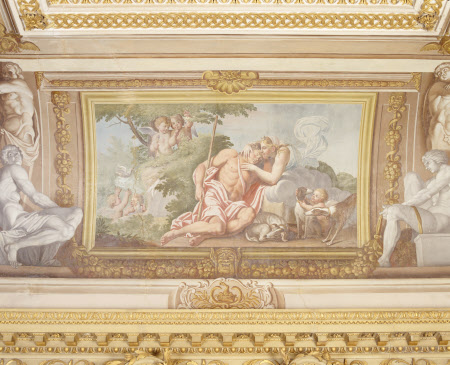 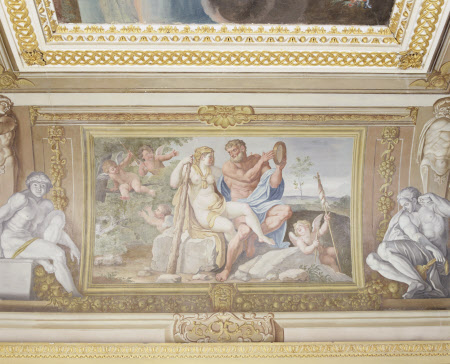 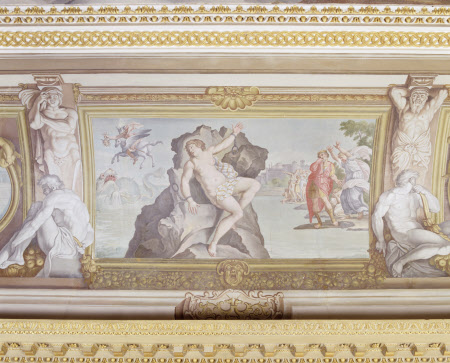 Tempera paint on plaster ceiling fresco, Apollo in his Chariot (after Guido Reni) and scenes of the The Loves of the Gods (after Annibale Carracci) by Giuseppe Mattia Borgnis (Craveggia 1701 – London 1762), circa 1758/61. In the centre: Apollo driving his Chariot with seven Horae, Phosphorus and preceded by what has traditionally been identified as Aurora (but is possibly, his sister Diana, goddess of moon and therefore symbolising night being pushed away) after Guido Reni’s fresco of 1613 - 1614 in the Palazzo Pallavicini-Rospigliosi, Rome. The other scenes, divided by grey grisaille male figures, after Michelangelo's ignudi, herms, green grisaille medallions and brunaille pairs of putti in the corners are after those at the Palazzo Farnese, Rome from the important fresco cycle, commissioned by Cardinal Odoardo Farnese for the wedding between Ranuccio Farnese and Margherita Aldobrandini, Pope Clemente VIII’s niece (1597–1608). They depict the Loves of the Gods in the Farnese Gallery in the west wing by the Bolognese painter Annibale Carracci and his brother Agostino (until they argued) and other artists in the workshop who included Giovanni Lanfranco, Francesco Albani, Domenichino and Sisto Badalocchi, which is currently being restored (2014). They are set within painted frames (quadri riportati) painted on an illusionistic architectural framework referred to as quadratura. The painted nudes, or caryatids, putti, and herms help support the painted framework. The scenes include: Diana and Endymion (N), Hercules and Omphale (Iole) (S), Perseus on Pegasus and Andromeda (E) and A Woman borne off by a Sea God (?Galatea and a Triton) (W) for which the working cartoon for the orginal fresco is in the National Gallery, London. The flanking medallions include: Europa and the Bull (Jupiter) (Rape of Europa) (left;W), Cupid and Pan (right;W) and Hero and Leander (left; E) and a Scene of Abduction (right;E) and the putti in the corner have the general theme of lust battling with virtuous love, particularly in one corner (SE): Cupid and Phosphorus (both children of Venus) with the flaming torch. Gian Pietro Bellori, the famous biographer of artists, called the cycle 'Human Love governed by Celestial Love' and Ludovico Carracci, Agostino's cousin, engraved uncensored versions in prints of the scenes. The Triumph of Bacchus and Aridane in the Farnese Gallery is replaced here with Apollo in his Chariot after the Guido Reni fresco although Borgnis had already copied the Triumph of Bacchus and Aridane on the dining-room (now called the Blue Drawing Room) ceiling for Sir Francis Dashwood, 2nd Bt (1708 - 1781) at West Wycombe Park, Buckinghamshire in around 1752.