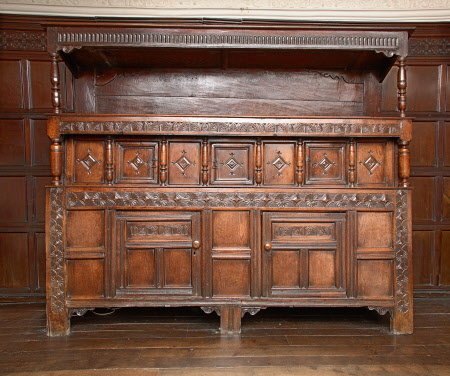 Part of the bequest from the estate of Mr J.J. Kildwick Hall in January 1946. John Jeremy Brigg (1862-1945) and his twin brother, William Anderton Brigg (1862-1935) of Kildwick Hall nr Keighley had purchased East Riddlesden Hall in 1934 and presented it to the National Trust, having previously also salvaged various internal fittings removed from the hall earlier in the 20th century. In January 1946 various items of historic interest from their KIldwick house were donated to East Riddlesden Hall by John Brigg's executors with the rest of Kildwick Hall and its contents being auctioned. This item was photographed in a 1911 Country Life article. The article records that the Brigg family had acquired it from a house that, “served as the model for Emily Bronte’s ‘Wuthering Heights’ and may, indeed, be the very piece she describes as the ‘pewter-bearing dresser’ “ [believed to be Ponden Hall nr Stanbury, West Yorkshire]. John Brigg, along with other members of his family, had been founder members of the Bronte Society.