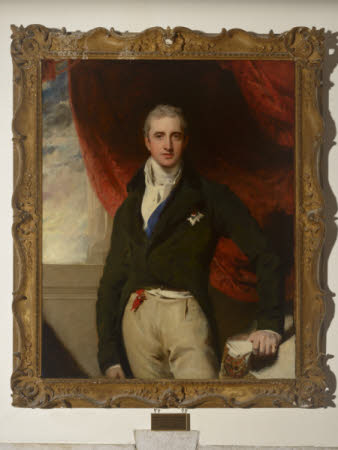 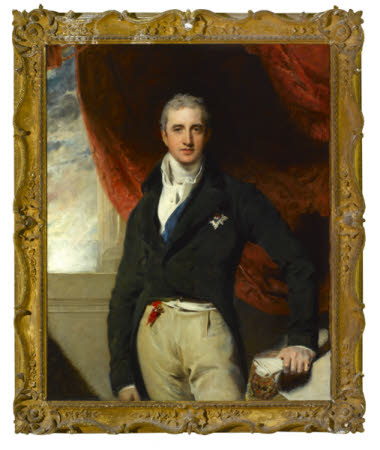 Lord Castlereagh was educated at Armagh and St John’s College, Cambridge, so that he might ‘love Ireland and respect England.’ He was an able politician, Chief Secretary for Ireland in 1798 and promoted the Act of Union of 1800 but when George III refused to grant Catholic emancipation, he resigned, re-entering the Cabinet in 1802. He was created Foreign Secretary in 1812; Wellington was a friend and Napoleon an adversary. He was Britain’s leading negotiator at the Congress of Vienna but became unpopular during the domestic unrest with repressive measures and committed suicide in 1822. Amelia (Emily) Hobart, daughter of the 2nd Earl of Buckingham was his wife whom he married in 1794. There are four autograph versions of this painting by Lawrence but this is the earliest. It shows Lord Castlereagh in a plain black coat, ornamented with the star and riband of the Order of the Garter. An autographed version also hangs in the Waterloo Chamber at Windsor Castle.

Oil painting on canvas, Robert Stewart, 2nd Viscount Castlereagh and 2nd Marquess of Londonderry, KG, GCH, MP (1769–1822) by Sir Thomas Lawrence, PRA (Bristol 1769 – London 1830), 1814. A three-quarter-length portrait, in a black coat, his hand resting on a desk. He is wearing the Star of the Order of the Garter, which Castlereagh received in June 1814, so it was added after being exhibited that summer at the Royal Academy. There are replicas in the Royal Collection, another at Mount Stewart and a half-length with the Earl of Clanwilliam.