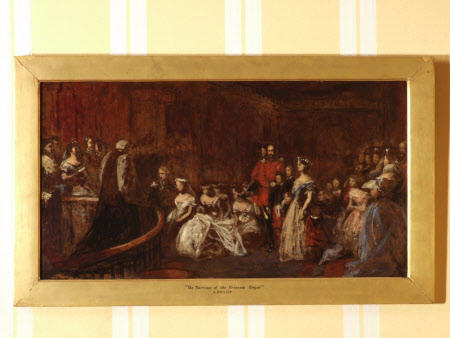 Oil painting on canvas, The Marriage of the Princess Victoria Adelaide, Princess Royal (1840-1901) later Empress of Prussia, to Crown Prince Frederick William of Prussia (1831-1888) later Emperor Frederick III, Emperor of Germany, King of Prussia (1831-1888), on 25th January 1858 by John Phillip, RA (Aberdeen 1817 - London 1867). Original in the Royal Collection, at Buckingham Palace. (cat.no.548 - The Marriage of the Princess Royal, 25 January 1858 by John Philip. Illustration no.469 in The Victorian Pictures in the Collection of Her Majesty the Queen by Sir Oliver Millar - plates - 1992, University Press, Cambridge) Sketch of Princess Alice, full-length as a bridesmaid, for ‘The Marriage of the Princess Royal, 25 January 1858’. Thought to be a preparatory study for Philip’s oil painting in the Royal Collection, though it is closer in appearance to the present oil study at Hinton Ampner. Christie’s, London, 28 February 2007

Given by the artist to Miss Skerrett;