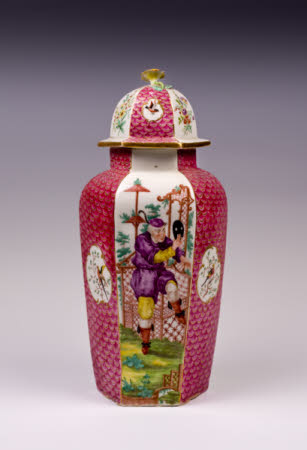 An hexagonal jar and cover (vase), steatitic (soapstone) soft-paste porcelain, the sides painted alternately with a pink and gilt scale-pattern bearing a scroll edged white cartouche with a bird on a branch, the other panels with a lady in a rose-coloured gown and a light-blue skirt walking in a garden and holding a long-tailed bird in her hand, another panel with a girl in a pink bodice, scarlet jacket, fur stole and yellow skirt standing under a fruit tree holding a bird's nest in her hands, the third panel with a clown holding a black mask before his face and wearing a mauve costume, yellow breeches and high scarlet boots with black bows, oriental trellis in the background and in front, the domed cover decorated with the same pink and gilt scale-pattern bearing scroll edged cartouches with a flying bird, and the white ground panels painted with sprays of flowers, surmounted by a yellow flower finial, jar and cover made at the Worcester porcelain factory, and probably painted in London in the James Giles workshop, circa 1770-1774. See H. Rissik Marshall, ‘An unusual Worcester vase and cover’, The Antique Collector, April 1956, p. 53 and Bonham’s, Edinburgh, 29 November 2012, lot 226.

This rare hexagon jar was probably painted in the London studio of James Giles (1718-1780): in 1910, Robert Lockhart Hobson (1873-1941), a British Museum curator, attributed it to the Bristol manufactory, when it was on loan to the Bethnal Green Museum. Alternate sides are painted with a “naturalistic” bird on “stringy” branches within scroll-edged cartouches on a two-tone pink and gold scale ground, with three panels painted with chinoiserie figures representing March, April and July, from the series entitled Allégories des Douze Mois de L’Année, engraved by P. C. Canot, published in London in 1759, and again in C. Leviez, L’Oeuvre de Jean Pillement, Paris, 1767. See Paul Crane 'Tracking James Giles on Worcester Porcelain', Magazine Antiques, June, 2007, pp. 62-69; and Maria Gordon-Smith, ‘The Influence of Jean Pillement on French and English decorative Arts, Part Two Representative Fields of Influence’, Artibus et Histoire Vol. 21, No. 42, (2000) pp. 119-163, 131-2.