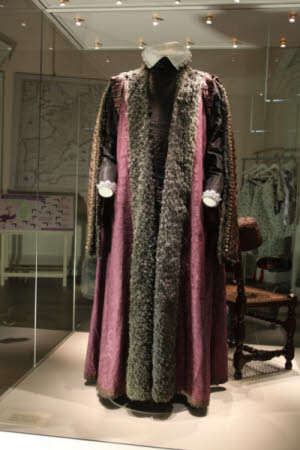 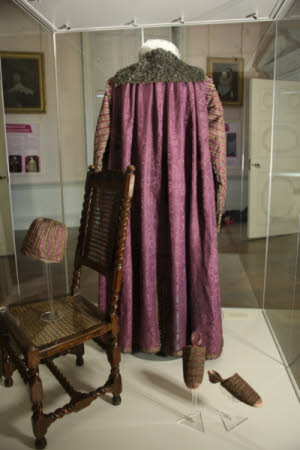 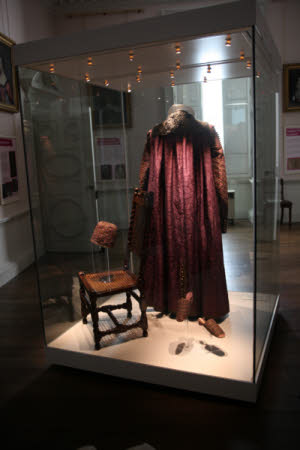 A purple silk damask man's robe, cap and slippers. The robe is lined with slate blue silk shag which is a fabric with a long pile simulating fur. The robe is decorated with gold and silver braid and has matching buttons. It was reputed to have belonged to Sir Francis Verney and to have been sent back to Claydon from Messina in Sicily where he died. Sir Francis left England and his family in 1608 and became a pirate on the Barbary coast of North Africa.

A purple silk figured damask man's robe, cap and pantoufles. The robe lined with slate blue silk shag which is meant to simulate fur. It has long hanging sleeves which are decorated with gold and silver braid. The arms were placed through an armhole just infront of these sleeves which were purely decorative. The cap and pantoufles match the robe, they are made from the same fabric. The pantoufles are shoes with no backs, like mules. The robe is long, it would fit a man of about six feet tall. The purple damask gown is full skirted and appears to be cut so that there are almost 8 widths around the hem (see J. Arnold 101-102). The neck and sleeve shaping of the front panel is extended beyond the top line of the shoulder to form the yoke seam with the back of the shawl collar. The two centre back panels are closely gathered with cartridge pleats to fit the back yoke. There are two green satin stay tapes (the tape seems to have made from the selvedge of the silk shag) which were attached at the centre back of each armhole running across the back, presumably to support the yoke seam and cartridge pleats by bearing some of the weight of the hanging sleeves. There are mock buttoned pockets at the side seams formed from the gold and silver braid and metal thread covered buttons. The centre front and hems and armholes are also trimmed with two rows of braid with mock splits and a functional split at the centre back also outlined with braid and buttons. The shawl collar is made from two pieces seamed at the centre back (the pieces may have been cut from the excess left from cutting the centre front panel). The centre back neck seam of the shawl collar also forms part of the back yoke seam. The sleeves are straight to the elbow tapering to a straight cuff. They are heavily trimmed with braid of gold and silver in a chevron pattern, with buttons and loops running closely from the shoulder point to the cuff, which allows the sleeve to be buttoned or left open. There is also a short opening with buttons at the inside seam at the cuff. Only the back half of the sleeve is attached to the back armhole, leaving the front half of the open allowing the sleeve to be worn hanging to the back of the arm as seen in images of men and women of the late Tudor and early Jacobean period. The sleeves have a slashed sleeve cap or wing, each tab being trimmed with gold and silver braid. The Robe is dated to about 1610 and reputed to have belonged to Sir Francis Verney of Claydon House, Oxfordshire, who died in Messina in 1615. The gown is part of a set with a matching cap and a pair of slippers.

Accepted by HM Government in lieu of inheritance tax and allocated to the National Trust for display at Claydon House, 2005.