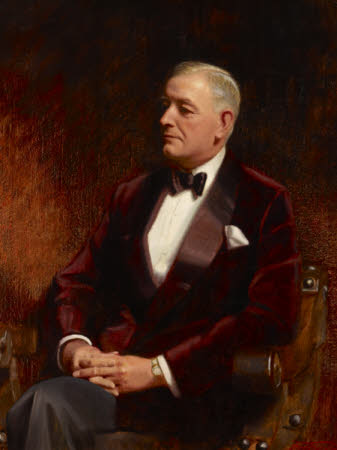 He trained as a tailor and aged 19, became manager of the Grand Clothing Hall in Keighley. Yorkshire. He married seamstress, Ann Elizabeth Craggs in 1899, and together they set up a market stall selling gentlemen’s accessories, but struggling with two jobs, he was forced to choose which career to follow.The couple spent sleepless nights praying they would make the right decision and eventually the young man chose to go it alone. The outcome was ‘Price’s Tailors’ which later went on to become the world’s second largest tailoring chain, with more than 500 shops and 12,000 employees. The couple set up shop in their front room in Silsden and his first premises, a small shop in Keighley, Yorkshire, opened in 1906. Ann Elizabeth died in 1936. Having established a successful business in the North of England, Henry Price took the decision to buy Wakehurst Place in West Sussex later that year, despite falling through a rotten floor on his first visit.He moved there in 1938, and as well as completely restoring the house, he saved the famous gardens created by Sir Gerald Loder. Knighted in 1937, Sir Henry married again in 1939, his bride Eva Mary Dickson, being nearly 30 years his junior. “Eve” was the perfect hostess and Wakehurst became a place buzzing with weekend shooting parties, halted only in 1941, when he offered the house to the Canadian Army. The collection, which had to be removed and stored for safe keeping in the stables and outhouses, remained unscathed during the Blitz, although bombs fell in the gardens. As an important member of many industrial committees, Sir Henry was a friend of Prime Minister Harold Macmillan who lived close by and used to visit him at Wakehurst. Other notable visitors included Queen Mary, who wrote of the beauty of Wakehurst Place, and the Duke of Kent. Sir Henry, who read extensively on foreign affairs, travelled widely and was passionately concerned that people of different cultures should know one another better. Acting on this belief he was a founder member of the Royal Institute of International Affairs, and in 1936 established for the Institute a Chair of International Economics at Chatham House. Later, in 1960, he made a generous donation of £100,000 to the UK Committee of the World Refugee Year. By now financially secure, Sir Henry began to play the stock market, selling his controlling share in the former “Fifty Shilling Tailors” in 1953, the year he was made a baronet. Dividing his time between West Sussex and his London residence Wilbraham House, off Sloane Square, Sir Henry began to devote time to his passion for gardening which he shared with his wife and the couple won many prizes at the Chelsea Flower Show. Every year they gave Christmas parties for the local children and summer fetes were held in the grounds of Wakehurst. Local charitable concerns benefited from his generosity - notably the Chailey Heritage for Children, in West Sussex, and also he set up an old peoples’ home in Ardingly. Always the generous benefactor, Sir Henry did not forget his northern roots, donating to Temple Newsam House, contributing £20,000 to a new Bradford Grammar School and founding another old peoples’ home in Scarborough. He was also a major contributor to the University of Leeds, where a Hall of Residence was named in his honour. Having made his fortune, Sir Henry now sought to surround himself with beautiful objects. To do this he enlisted the help of his good friend and golfing partner, Frank Partridge, proprietor of the renowned fine arts dealers in London’s Bond Street. As recorded in a privately published memoir by Partridge, he writes: “One of the greatest pleasures of my life was the furnishing of “Wakehurst”, the home of my good friend, Sir Henry Price. He gave me a blank cheque to do it with, and the only demand he made was that I make the house worthy of the wonderful Sussex countryside which surrounds it.” During the years preceding the Second World War, Sir Henry spent more than £100,000 on antiques for Wakehurst. No aspect of the refurbishment was overlooked by Partridge, who even went to the extreme of purchasing two black swans to enhance the whiteness of their other lakeside companions! Among the 450 lots in Sotheby’s sale, estimated to sell for in excess of £2 million, is much of the English furniture, Chinese porcelain and jade, Old Master paintings, Renaissance bronzes and silver purchased by Partridge on Sir Henry’s behalf. Partridge’s expertise ensured that Wakehurst was one of the last great collections put together before the Second World War. On his death in 1963 aged 86, Henry bequeathed the house and estate to the National Trust. It is now managed by the Royal Botanic Gardens at Kew.