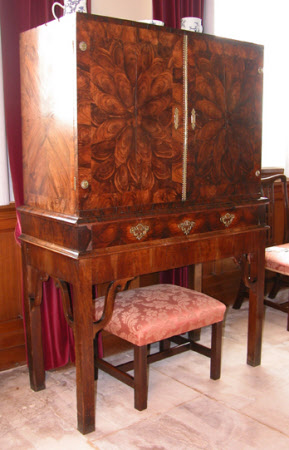 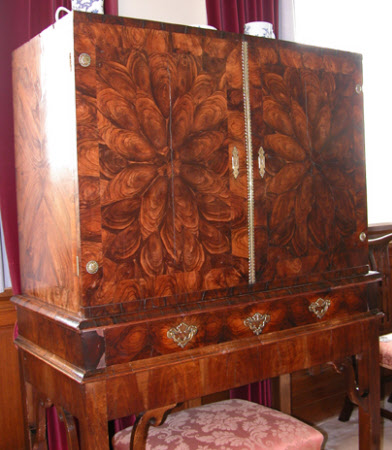 This cabinet is possibly 'a walnut tree cabinet of Gumleys' bought by Ashe Windham for £10 in 1735. The decoration is even more vibrant inside where some of the drawers are lined with yellow silk to keep treasures safe.

A cocus wood and walnut cabinet on later stand, the cabinet probably French circa 1670, the stand English, 19th century. Possibly supplied by Elizabeth Gumley in 1735. The cabinet has a pair of cupboard doors with brass mounts which enclose an arrangement of ten drawers positioned around a cupboard door which then encloses three further small drawers. There is a single frieze drawer below the cupboard and the whole is raised on a later stand with square section legs and corner brackets or spandrels.The drawers are mostly padded and lined with silk

Cocus wood is a hard wood from the Caribbean which was used by both French and English cabinet makers during the latter part of the 17th century. The possible attribution to France is based on the use of solid walnut for the drawer linings and also the placement of the handles. Although the present handles are later additions the original holes are set to the centre of each of the drawers rather than towards the top as was more common on English examples. Possibly 'A walnut tree cabinet of Gumleys' bought by Ashe Windham for £10 in 1735. For a similar cabinet in form and style see Powis Castle (NT1180814) see also Bowett, Adam 'English furniture 1660-1714' pg.42 pl.2:10 (James Weedon 2017)