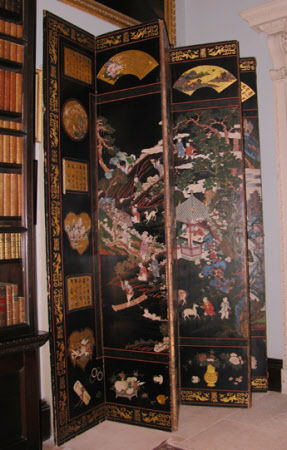 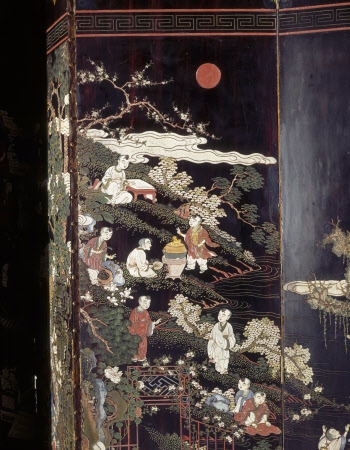 A coromandel lacquer seven panel screen, Chinese, early 18th century. See full description for further information. The panels decorated with scenes of figures and trees and buildings within a landscape and with gilt panels of Chinese script within a gilt border of stylized dragons. 52 boys are painted within the 6 panels but thought to have originally 100. Originally a larger screen, some panels missing, one end panel a later addition. Coromandel lacquer is a type of lacquer that is incised, originally with very brightly coloured decoration. This technique was used in Northern China from the 17th century onwards, mainly for export to Europe. The name is derived from The English East India Company's trading posts on the Coromandel coast of India

Research notes 2021: "The screen is from the Chien-Lung Manchu dynasty. Midway through 1644 to 1930- about 1759. The screens were made for the Chinese export market, often for special orders for visitors when the story of the transaction would be one of the lettered panels on the screen, "A man came to buy etc". This screen is unusual in that it does not show the mroe commonly seen bird/flower/palace scenery. Instead it depicts a landscape overrun with boys. The scene, of the first, second and forth panels depict a hunting party setting forth. Translated as "the morning, the sun is shining and everybody is happy, they hunt for animals all day, when it grew dark they all return home having killed a wolf and other animals." The motif of "100 boys" has a long history in Chinese art and decoration. It is said to originate with the founder of the Zhou dynasty who supposedly had 99 sons by his 24 wives and then adopted an orphaned baby boy to round the number up. It is thought to have entered into the Felbrigg collection by Kathering Windham in 1729".

Possibly originally acquired by William Windham I (1647-89), who built the west front of Felbrigg in the 1680s; bequeathed to the National Trust with the rest of the collection and the house by Robert Wyndham Ketton-Cremer (1906-1969).