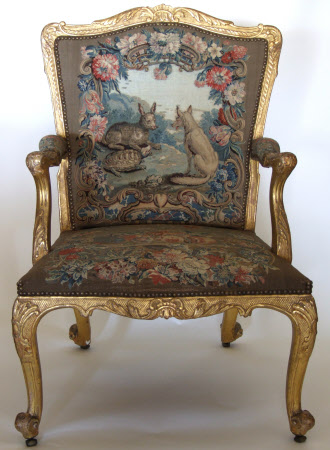 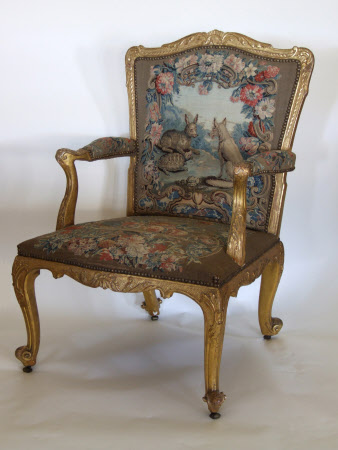 An armchair, from a set of eight giltwood armchairs, circa 1755-1760, en suite with a sofa (NT 137629) probably made a few years later, with a serpentine shaped back carved with foliage on a matt ground, the sides issuing padded arm-rests on scrolling supports above a shaped seat on cabriole legs, carved with foliage on an incised ground, terminating in scroll feet. The back and seat are covered with needlework in the French taste, the back depicting an Aesop's Fable after the illustrations by Francis Barlow published in 1666, the seat with still lives of fruit within similar foliage borders. One needlework back panel of the set is signed "Danthon", the name of a family of Huguenot weavers working in London, recorded from before 1707. The present set was acquired by Sir Matthew Fetherstonhaugh as part of the refurnishing and redecoration of Uppark House after his return from the Grand Tour in 1752. It might have been supplied by John Bladwell (fl.1725-1768), established in Covent Garden, who provided carved giltwood furniture to Uppark between 1750-60 as his name occurs several times in Sir Matthew's accounts books. Equally, Paul Saunders (1722-1771), upholsterer and cabinet maker established on Soho Square, received "£33.0.6d" for 'Tapestry' from Sir Matthew Fetherstonhaugh in 1761 (Sir Matthew's accounts book 20th March 1761). It could suggest that he supplied the matching sofa and re-upholstered the whole set. A set of walnut armchairs at Petworth covered with tapestry depicting the same subject are attributed to Saunders (NT485400.1-6). The distinctive design of these armchairs with their wide tapering backs are close to some "French chairs" illustrated in Chippendale's "Director" published in 1754.

DANTHON (signed on back panel)