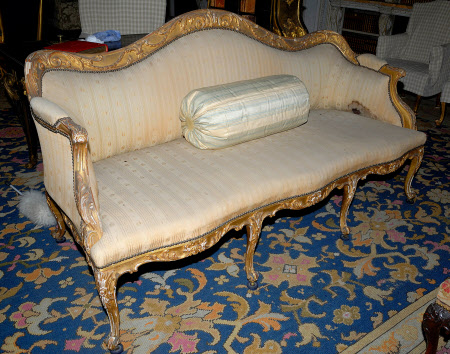 A giltwood sofa, circa 1760, made to match a set of eight armchairs (NT 137632), the serpentine shaped back with a top rail carved with acanthus foliage, scrolls and husk garlands, the padded sides with scrolling arms above a shaped seat on eight cabriole legs, carved with foliage, terminating in scroll feet. Reupholstered. originally covered as the armchairs with tapestry in the French taste, the back depicting an Aesop's Fable after the illustrations by Francis Barlow published in 1666, the seat with still lives of fruit within similar foliage borders. This sofa was probably commissioned by Sir Matthew Fetherstonhaugh to match the set of armchairs probably supplied by John Bladwell (fl.1725-1768) as part of the refurnishing and redecoration of Uppark House after his return from the Grand Tour in 1752. Paul Saunders (1722-1771), upholsterer and cabinet maker established on Soho Square, received "£33.0.6d" for 'Tapestry' from Sir Matthew Fetherstonhaugh in 1761 (Sir Matthew's accounts book 20th March 1761). It might suggest that Paul Saunders supplied the sofa and the tapestries to cover the armchairs with the same upholstery and create the impression of a set.