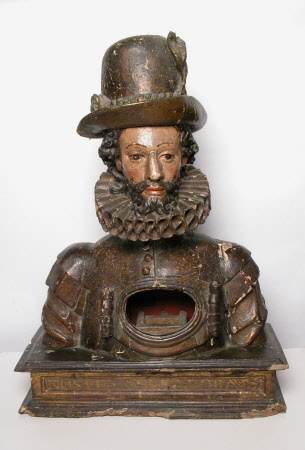 16th century Spanish reliquary in the form of a bust of a man, faint inscription around base. St Ignatius. Figure has an oval hole in its chest and a lockable door in its back. Damage to hat, front and plinth. '16th century Reliquary of St Ignatius of Loyola (1491-1566) the founder of the Jesuit movement' (M. Jessup). In notebook no.5, page 68 (1340945.5) Charles Wade refers to: 'Mermaid no. 51 Spanish Reliquary S.Ignatius. Carved painted & gilt Bust in 16th Cent. costume with ruff & hat with upturned brim. Lettering around base: PRECATOR NOSTER CENON ORA PRO NOBIS' Includes sketch with dimensions.