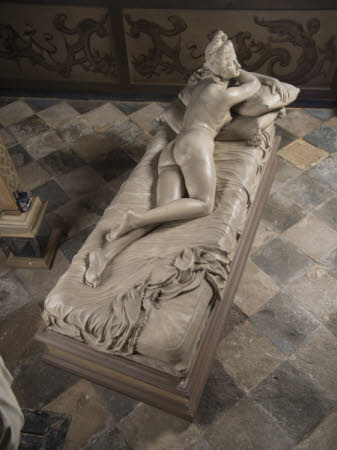 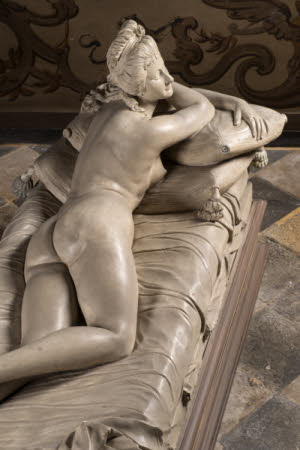 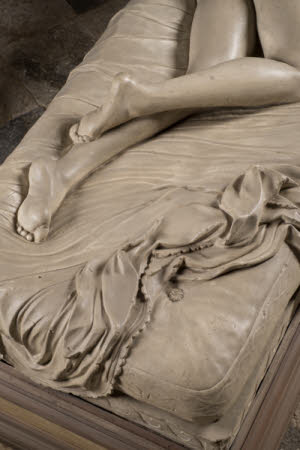 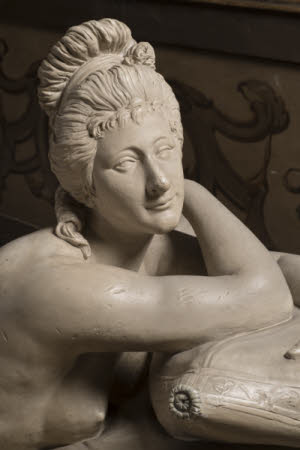 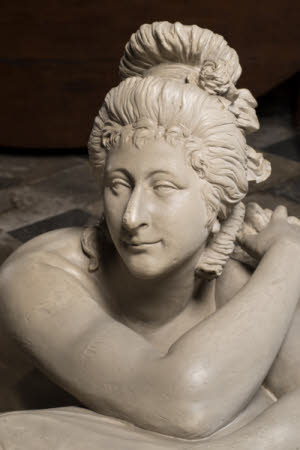 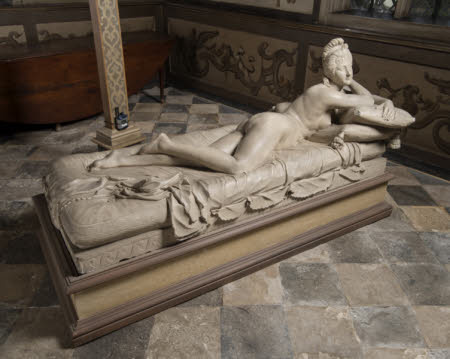 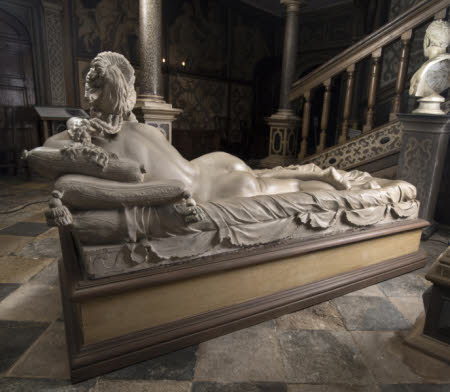 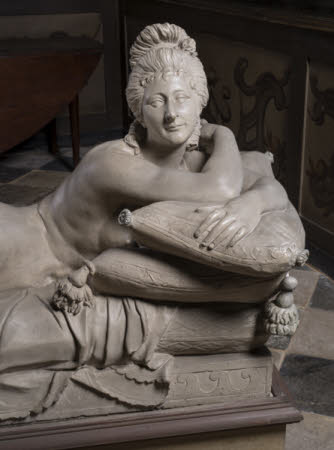 Giovanna Zanerini, nicknamed 'La Baccelli', was a celebrated Italian dancer who performed in Paris, when ballet was beginning to develop into an art form independent of the opera. She made her English debut in 1774 as the Rose in 'Le Ballet des Fleurs' at the King’s Theatre and it was there that she attracted the bachelor John Frederick Sackville, 3rd Duke of Dorset. By 1779, La Baccelli had taken up residence at Knole, the Duke's ancestral home in Kent, where she was given a tower of her own. This life-size plaster statue, attributed to Giovanni Battista Locatelli, depicts a naked and elegantly coiffed Baccelli, lying prone in a seductive pose. The composition alludes to the Sleeping Hermaphrodite, an ancient marble sculpture, presumably as an intentional joke as well as a convenient Classical model. In 1789 the Duke and La Baccelli separated in 1789 and by the following year the Duke settled down to a respectable marriage with an heiress. According to an inventory of Knole in 1799, the statue of Baccelli was removed to ‘the Top of the Stairs, next [to] the Wardrobe’, where she was rechristened 'A Naked Venus’.

Plaster statue of a woman, Giovanna Francesca Antonia Guiseppe Zanerini, called 'La Baccelli' (d.1801), attributed to Giovanni Battista (John Baptist) Locatelli (1734-1805), 1778. Life size plaster statue of Baccelli, the famous dancer and mistress of John Frederick Sackville, 3rd Duke of Dorset (1745-1799). The woman is naked and reclines seductively on a mattress which is covered with a loose sheet. She leans up on her elbows, supported by two pillows decorated with tassels at the corners. Her right leg is crossed over her left leg, and she looks to her right, a smile upon her lips, and her hair swept up with ringlets around her neck. The statue is displayed on a wooden plinth made for the 1976 exhibition at Tate Gallery.

Giovanna Francesca Antonio Guiseppe Zanerini (d.1801), known as ‘La Baccelli’, was a celebrated Italian dancer and held the position of principal ballerina at the King’s Theatre, Haymarket. Her first appearance was on 8 November 1774 in the ballet Pirhame et Thisbe and in Le ballet de fleur; she remained a featured dancer at the Opera until 1783. Baccelli was widely known to be the mistress of John Frederick Sackville, 3rd Duke of Dorset (1745-1799), and lived with him at Knole during his bachelor years, bearing him a son, also called John Frederick Sackville, who was brought up at Knole. The third Duke commissioned a number of portraits of his mistress, perhaps the most well-known of these is the full length portrait by Thomas Gainsborough, exhibited at the Royal Academy in 1782. The painting remained at Knole until 1890, when it was sold; it is now in the Tate collection (T02000), purchased in 1975. A second portrait was painted by Joshua Reynolds in 1783, a friend of the Duke's, which remains in the private collection at Knole. Gainsborough’s full length portrait depicts Baccelli as a dancer, mid movement, set within an idealised landscape setting. Reynolds’ portrait by contrast is a head and shoulders, portraying her as a woman of the stage. Baccelli is seen removing her theatrical mask and gazing over her shoulder at the viewer, her hair slightly dishevelled and trailing down her back. She is in the guise of a Bacchante, her hair dressed with a garland of leaves, about to walk into a shady woodland, her gaze suggests that the viewer follows her. While Gainsborough’s portrait celebrates Baccelli’s professional status as a celebrated ballerina, Reynolds’ portrait is a more private image of a mistress, in which her theatricality is exposed as seductive, rather than a serious occupation. The plaster statue of Baccelli was the first portrait of the ballerina to be commissioned by the third Duke; his account book for 1778 lists ‘A Naked Venus Whole Length (Plaister) - £16.0.0’ which is almost certainly this work. The sculpture has been attributed to Giovanni Battista Locatelli (1734-1805), an Italian sculptor, born in Verona but who subsequently worked in Venice where he receiving patronage from British travellers on the Grand Tour. Locatelli was in England by 1778 and exhibited a sculpture entitled ‘A Venus reclined on a couch, a model’ in the 1779 Royal Academy exhibition (number 180). Two years later in 1781 he exhibited a portrait bust of Baccelli (number 516), location now unknown. It is believed that the reclining Venus exhibited in 1779 was a model for a full size work in marble now in the collection at Stratfield Saye, which is signed by Locatelli, but if the Duke's account book is referring to the statue of Baccelli as suggested, Locatelli had already completed his plaster statue of the dancer, making it his first reclining nude statue. Rupert Gunnis attributed the plaster at Knole to Locatelli on the basis of the sculpted bust he also exhibited at the Royal Academy, and the similarities seen between the Stratfield Saye sculpture and that at Knole. The Knole statue is a highly sensualised depiction of the dancer, modelled on the famous ancient Roman marble of the Sleeping Hermaphroditus, now in the Louvre. While painted and sculpted images of a reclining nude female figure are prevalent, they predominantly represent a mythical figure, usually Venus, rather than a portrait of a contemporary figure. That the Duke of Dorset’s account book described the statue as ‘A Naked Venus’, is particularly telling of the decorum required around such an image. Indeed, once the Duke had ended relations with Baccelli and married the heiress, Arabella Diana Cope (1767-1825), the statue was removed to a discreet position within the house: the 1799 inventory of Knole places the statue ‘At the Top of the Stairs, next to the Wardrobe’, where it is described as ‘A Naked Venus, whole length, plaister’. Anna Moore (July 2018)

Commissioned by John Frederick Sackville, 3rd Duke of Dorset (1745-1799) in 1778. Transferred to the Government in lieu of inheritance tax and allocated to the National Trust for display at Knole, 1966.