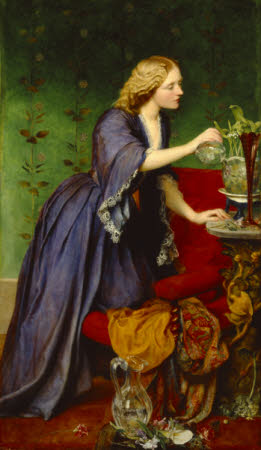 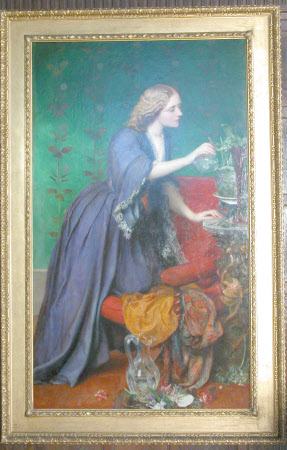 Oil painting on canvas, Jane 'Jeanie' Elizabeth Hughes, Mrs Nassau John Senior (1828-77) by George Frederick Watts OM, RA, (London 1817 - Compton 1904), 1858. A full-length portrait of a woman, turned to right, wearing a blue gown with loose trace-trimmed sleeves, kneeling on a crimson armchair, an ochre and red paisley shawl draped over the front corner of the seat. The woman waters lilies of the valley contained within a Chinese porcelain planter on a gilt console table, a fluted red glass stem vase beside the planter. Flowers and a carafe of water in the foreground; against a background of floral-patterned arsenic-green wallpaper. Jeanie Senior was the sister of Thomas Hughes, the Christian Socialist and author of Tom Brown's Schooldays, and daughter-in-law of Nassau William Senior (1790-1864), the economist and creator of the 1834 Poor Law. She became the first woman Inspector of Workhouses and Pauper Schools (1874) and helped the co-founder of the National Trust, Octavia Hill, with the accounts of her housing schemes.

By descent from the sitter to Oliver Nassau Senior (1901-1992), grandson of the subject, by whom lent to Wightwick from 1947, and from whom bought by National Trust with the encouragement of Lady Mander in 1955.