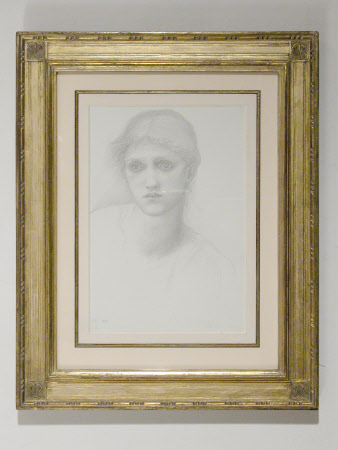 Pencil drawing on paper, A Study of a Woman's Head, probably Julia Jackson, Mrs Leslie Stephen (1846 - 1895) by Sir Edward Coley Burne-Jones (Birmingham 1833 - London 1898), signed and dated 1873. A head and shoulders portrait study of a young woman with her hair taken back off her face and looking to left. A study for the tapestry The Passing of Venus.

Pencil drawing, A Study of a Woman's Head, by Sir Edward Coley Burne-Jones (Birmingham 1833 - London 1898), signed and dated 1873. This is a fine example of Burne-Jones' delicate and sensitive pencil technique of the early 1870s, comparable with his numerous pencil drawings of Maria Zambaco. The intensity of the eyes is particularly striking. The sitter is probably Julia Jackson, Mrs Leslie Stephen. The drawing bears a very strong resemblance to the head of the Virgin in the oil painting The Annunciation (Lady Lever Art Gallery), designed in 1876 and completed in 1879, for which she was the model. She was the niece of the photographer Julia Margaret Cameron and her sister the celebrated hostess Mrs Prinsep of Little Holland House who had befriended Burne-Jones. Julia Stephen was the mother of Virginia Woolf and Vanessa Bell. Pencil studies of her exist in a sketch book of circa 1874.

Purchased from Agnew's 1938 by Geoffrey Mander; transferred to the National Trust on the death of Sir Geoffrey Le Mesurier Mander (1882-1962)