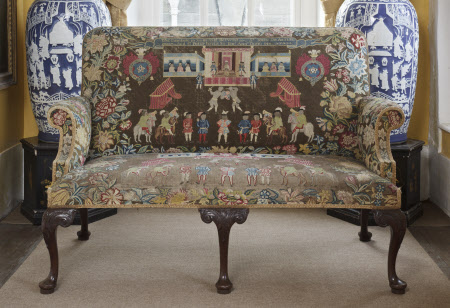 A sofa, one of a pair, part of a set of seat furniture, English, circa 1730, comprising two sofas and eight chairs, with padded back and seat upholstered in contemporary petit and gros needlework, depicting the 15th century combat of John Astley "The combate in Paris Betwixt Sir John de Astley and Sir Peter de Masse, 29th August, 1431" with fine fixed (8 stitches per cm) canvas work covers, linen canvas embroidered in coloured wool and silk yarns. The centre of the back and the seat have a pictoral scene surrounded by entwined flowers on a brown silk ground. Two mounted knights in armour charge each other with lances watched by the King, seated on a throne and flanked by female courtiers seated under canopies. In the foreground the knights are watched by standing male courtiers and mounted trumpeters, the central male figure wears a tabard with a coat of arms. Rayon outside back.