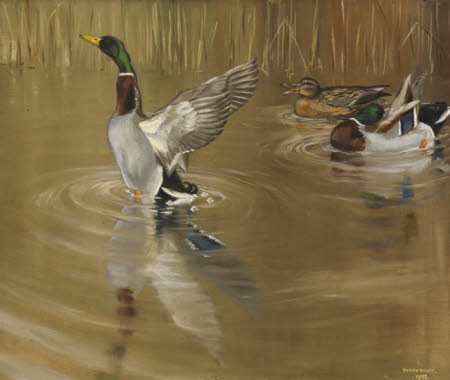 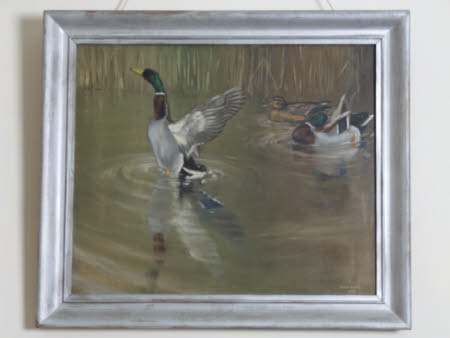 Oil painting on canvas, “Mallards Preening and Drying” by Sir Peter Markham Scott (London 1909 – 1989), painted in 1933. A mallard drake rises out of the water, his wings extended behind, with reflection below. A second drake floats and preens beside a duck. Thin screen of rushes in water behind. Signed bottom right "PETER SCOTT. 1933." - "Mallards preening and drying" on faded typed label on back of canvas stretcher and in capitals in pencil on stretcher itself. Shaw was known to be a lover of birds and animals. Both Shaw and Charlotte supported the Royal Society for the Protection of Birds, and in the late 1940s Shaw became a member of The Severn Wildfowl Trust, founded by the ornithologist and painter Sir Peter Scott in 1946. Peter was the son of the Antarctic explorer Captain Scott and Shaw’s close friend the sculptor Kathleen Scott (later Baroness Kennet). Shaw paid for Peter's education after the death of his father. Peter visited Shaw’s Corner as a child with his mother Kathleen whose photograph is on the wall in Shaw's study, pictured with one of the busts of Shaw she sculpted.

Signed bottom right "PETER SCOTT. 1933." - "Mallards preening and drying" on faded typed label on back of canvas stretcher and in capitals in pencil on stretcher itself. Brown label with faded text on back of frame appears to read - "ACKERMANN and SON LTD / Publishers and Art Dealers / BOND STREET, LONDON W."