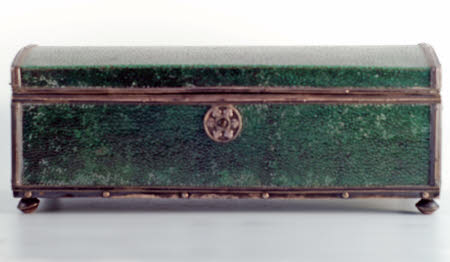 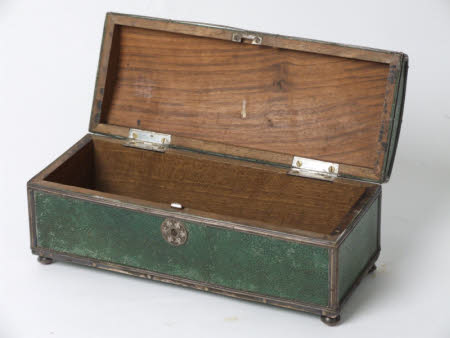 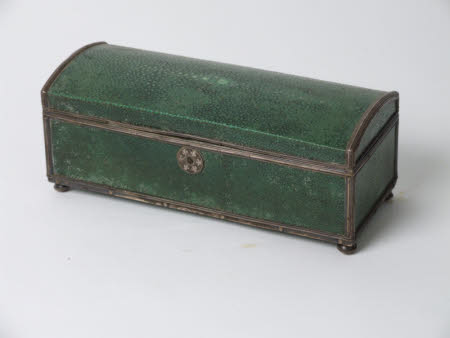 A cedarwood casket covered with shagreen, stained green, fixed with silver mouldings and with silver bun feet. Made by the Arts and Crafts silversmith John Paul Cooper (1869-1933), circa 1930, and purchased by Bernard Shaw in 1931.

John Paul Cooper (1869-1933) was a craftsman who specialised in metalwork and jewellery, and became a leading a leading figure in the British Arts and Crafts movement. He was strongly influenced by William Morris. Cooper met Bernard Shaw in 1931. Throughout his married life, Shaw supported artists and craftsmen like Cooper, who were producing expensive hand-crafted work. This shagreen and silver casket by John Paul Cooper (1869-1933) was purchased by Bernard Shaw in 1931 at the same time that he commissioned an exquisite silver reliquary from Cooper to present as a gift to his friend Dame Laurentia (Margaret McLachlan 1866-1953), the Benedictine nun who became Abbess of Stanbrook Abbey. Shaw met Cooper in the summer of 1931, having been introduced to him through Sydney Cockerell (the Director of the Fitzwilliam Museum). Shaw wrote to Cooper in May 1931, asking him to design a reliquary: ‘I have brought back from Bethlehem a small stone: a common scrap of limestone rock which I want to present to an Abbess as a relic.’ (Shaw to John Paul Cooper, 4 May 1931, quoted in Natasha Kuzmanović, John Paul Cooper: Designer and Craftsman of the Arts & Crafts Movement, 1999, p.134). In September 1931 Shaw photographed the Cooper silver reliquary in the garden at Shaw’s Corner shortly before he presented it to Dame Laurentia. (See for example NT 1715252.102). For a more recent image of the reliquary see Natasha Kuzmanović, John Paul Cooper: Designer and Craftsman of the Arts & Crafts Movement, plate 13). (Alice McEwan, 2020)