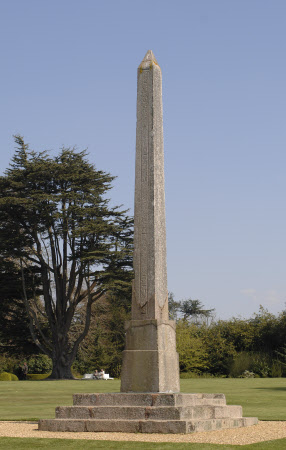 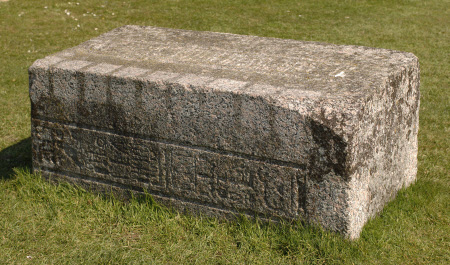 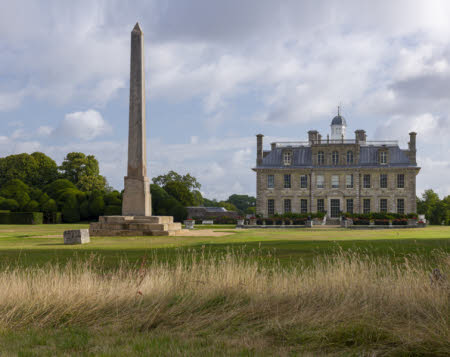 A 9-metre-high, pale pink ancient Egyptian obelisk stands today in a garden in Dorset. This important artefact was made some 150 years before the birth of Christ and was one of a pair that originally stood outside the Temple of Isis on the island of Philae in Aswan, southern Egypt. Its message is displayed in both ancient Greek and Egyptian hieroglyphic script, and may have been important to its earliest readers, as it communicated a revision to taxes. In the early 19th century, this inscription, along with the famous Rosetta Stone in the British Museum, became a critical aid to deciphering hieroglyphs. The obelisk was brought back to Dorset by the explorer William John Bankes (1786–1855) and installed at his home at Kingston Lacy in 1827. A calamity occurred on its journey to England, when its vast weight caused a pier to collapse, and it slipped into the River Nile. Fortunately, it was rescued and came to the attention of the Duke of Wellington (1769–1852), who chose its location in the garden at Kingston Lacy and in 1827 laid the foundation stone.

'Philae' obelisk, 150 BC, Pink granite. Obelisk, 9 metres, one of a pair that originally stood outside the Temple of Isis on the island of Philae in Aswan, southern Egypt. Three granite steps form the pedestal of a solar altar which was positioned near a temple dedicated to the Greco-Egyptian deity Serapis on the ancient site of Hierasycaminos (modern Al-Maharraqa). The obelisk was dedicated by King Ptolemy Euergetes II and his queens, Cleopatra II and III, and erected along with its pair to commemorate a revision of taxes.

William John Bankes (1786-1855), who inherited Kingston Lacy in 1834, discovered the obelisk during his pioneering travels to Egypt and the Near East in the years 1815-19. With the support of Henry Salt, Consul General in Egypt (1816-27), Bankes arranged for the obelisk to be brought back to Kingston Lacy. This was accomplished with the aid of the famed Italian adventurer Giovanni Belzoni (1778-1823), a prominent figure in the excavation and transportation of ancient Egyptian monuments to European collections. It was no easy undertaking; the initial attempt failed when the pier supporting the obelisk and pedestal gave way and resulted in both sliding into the bed of the Nile. The Duke of Wellington (1769-1852), who served with Bankes during the Spanish Peninsular War (1808-1814), took great interest in the object, which was the first of its kind to arrive in England. He lent his gun carriage for its onward transportation from London to Dorset. A plaque at the base of the obelisk confirms the Duke chose its location at Kingston Lacy and laid the foundation stone on 17 August 1827. The obelisk, which was instrumental to the decipherment of hieroglyphs, contains inscriptions on the shaft in both Ancient Greek and Egyptian hieroglyphic scripts. It was Bankes who, as a reader of Ancient Greek, was able to identify the word ‘Cleopatra’, thus making the connection which eventually led to a full decipherment of hieroglyphs by Jean-François Champollion in 1822. A skilled draughtsman and epigrapher, Bankes produced detailed drawings and inscriptions found on the ancient monuments he encountered. The drawings, including 'Geometrical Elevation of an Obelisk from the Island of Philae' (1821), provide invaluable information about a number of ancient monuments which have since suffered displacement, damage or destruction. Note on inscriptionThe third translation of the Greek done by William Bankes in 1825 reads: 'To King Ptolemy and Queen Cleopatra, the Sister, and Queen Cleopatra. the wife, beneficent Gods, the Priests of the great Goddess Isis in Abatus / and Philae, greeting. / Whereas those frequenting Philae, as Generals, and Prefects, / and Governors of Thebes, and royal scribes, and Prefects of / the frontier-guards, and all other Functionaries and constituted / authorities, and the rest who are in office, compel us to make / contributions to them against our will, and out of this it / results that the Temple is deteriorated, and that we are in / danger of not having what is appointed for the sacrifices and / libations to be made for you and your children; / We request of you, great Gods as you are, if it shall seem / good, to order Noumenius your cousin and secretary for correspondence / to write to Lochus your cousin and general of the Thebaid, not / to trouble us in these things, nor to suffer any other to do the / same, and to give us the necessary decrees to that effect, and in / them to permit us to set up a Monument on which we may / inscribe your kindness to us upon these points, that your favour / may be perpetuated upon it to all time; when this shall be done, / we and the Temple of Isis shall hold ourselves obliged. Fare ye well.'

Acquired by William John Bankes from the Island of Philae, Egypt, and transferred to Kingston Lacy (arr. 1821), where it remains; the Estates of Kingston Lacy and Corfe Castle were bequeathed by Henry John Ralph Bankes to the National Trust upon his death in 1981.