The Holy Family with the Infant Saint John in a Landscape 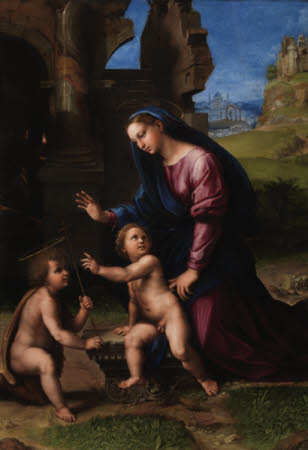 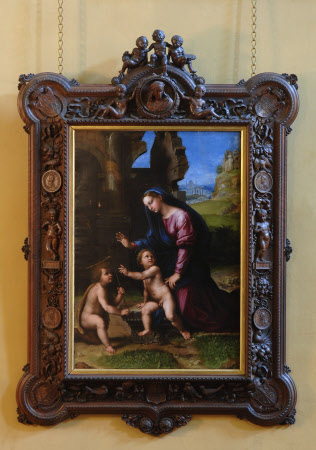 Painted by an Italian, looted from a Spanish castle and bought from a Frenchman - who threw in a donkey - by an eccentric travelling Englishman. The story behind this painting of the Holy Family speaks of the mobility of art and elite wealth in war-ravaged Europe in the early 19th century. The Englishman in question was the adventurer and collector, William Bankes, who served as the aide-de-camp to the Duke of Wellington during the Peninsular War. ‘Gentlemen’, the Iron Duke is purported to have said, ‘There will be no looting in this campaign and that includes you, Bankes’. In the case of the Holy Family, the French had already carried out the looting. Bankes encountered this picture, believed to have been painted by Raphael, in the autumn of 1813, when Bankes was living ‘in disguise’ behind the French lines in the besieged city of Pamplona. In a story he would recount years later, it was there that he dined with the French commanding officer, ‘who regaled him with a meal of rats, washed down with strong drink, and after dinner obliged him to buy a Raphael, which he had stolen from the Sacristy of the Escorial, and a donkey, which I don’t think he had stolen from anybody’. The painting, which has since been attributed to the circle of Raphael, had belonged successively to Vincenzo II Gonzaga, King Charles I and Philip IV of Spain. Aware of this illustrious provenance and convinced of Raphael’s authorship, Bankes commissioned an ornately carved frame of the highest quality from Pietro Giusti of Siena, the most famous Italian wood-carver of the period. As for the donkey, Bankes is said to have become so fond of the creature that he sent him back to England, despite the captain of the ship declaring that ‘the jackass should pay like a gentleman.’