Figures on a Shore with Bow and Arrows (fragment) 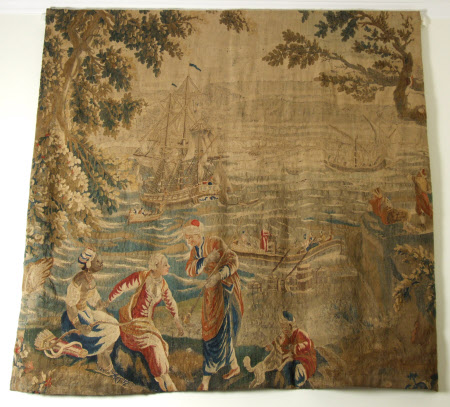 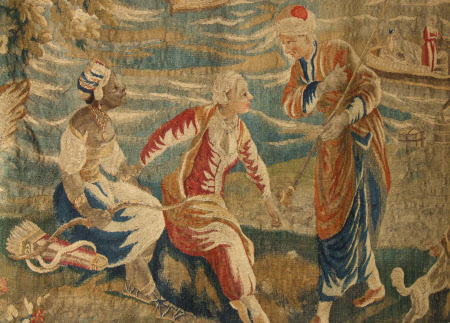 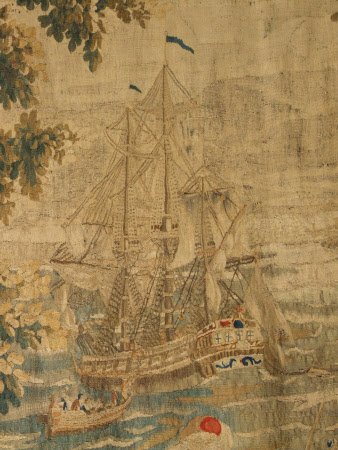 Figures on a Shore with Bow and Arrows (fragment) from a set of five Port Scenes, Aubusson, after a design by Claude Joseph Vernet, c. 1760-1780. In the centre foreground a small boy plays with a dog and to the left a man talks to a woman with an exotic headdress and a bow and arrow and a woman in a red dress, who sit on a bank. In the background rowing boats approach the shore where packets wait to be loaded and two men watch from a rocky outcrop. Sailing ships are moored in the distance. There are no borders and the tapestry has been cut from a larger piece.

A complete example of the same design, with the landscape extending further on all sides, is in the collection of the Fondation Toms Paul, Lausanne (de Reyniès 2010, cat. no. 67). The five tapestry fragments with ‘Port Scenes’ at Polesden Lacey are all cut down from larger tapestries. The series they belong to enjoyed considerable popularity in the late eighteenth century, and at least thirteen different designs of ports are known. The designs were inspired by prints after the painter Joseph Vernet (1714-1789) and his associate Charles François de la Croix (c. 1700-1782) (de Reyniès 2010, pp. 214-5). Vernet specialised in views of real and imagined seascapes and ports, often in exotic locations. The subjects chosen for the tapestry series range from his views of the Ports of France to views in Italy and generic scenes of sailors and fishermen. The ‘Port Scenes’ tapestries tend to include figures in Oriental dress, reflecting Vernet's romantic association of the quayside with voyages to distant lands. The tapestries were made in the French town of Aubusson in the late eighteenth century. Surviving tapestries from the series vary considerably in quality suggesting that a number of different Aubusson workshops wove the designs, and examples have surfaced with four different signatures. The set was probably in production from the mid 1760s until the end of the eighteenth century. Some examples are dated 1776 and 1777. A list of related tapestries can be found in De Reyniès 2010, pp. 214-5. Further examples include a tapestry dated 1777 was sold by Parke-Bernet, New York, 19 March 1949, lot 736, and a pair of fragments from the series sold at Christie’s, Paris, 22 April 2004, lot 645. At least seven different ‘Port Scenes’ passed through the New York dealers French and Company in the early twentieth century (Getty Photo Archive, nos. 0243243, 0243234, 0243236, 0243242, 0243246, 0184458). (Helen Wyld, 2012)