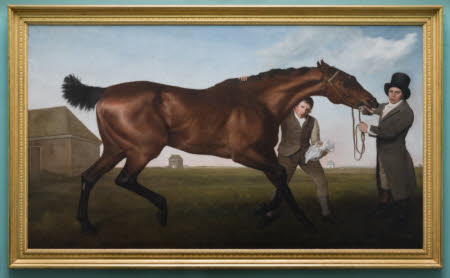 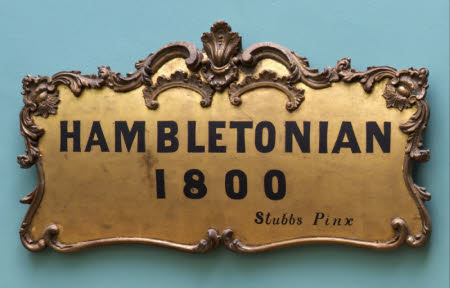 Hambletonian is the name of the handsome, prize-winning racehorse depicted here. He stands before us, gleaming with sweat and skittish from his race, the anatomy of his body and the tone of his muscles depicted in impressive detail. The picture is life-sized and impossible to approach without admiring the impressive physique of this sleek and powerful animal. It was painted by George Stubbs (1724– 1806), probably the most accomplished animal painter of any generation, right at the end of his career, and this work is considered one of his great masterpieces. It was commissioned by the horse’s owner, Sir Henry Vane-Tempest (1771–1813), as an homage to Hambletonian’s remarkable ability. The two figures of the stable boy and groom appear upright and stiff alongside the horse. Both look out at the viewer to catch our attention, as if challenging us to recognise the magnificence of their charge.

Oil painting on canvas, Hambletonian, Rubbing Down by George Stubbs, RA (Liverpool 1724 – London 1806), signed and dated, lower centre: Geo: Stubbs 1800. A painting of a racehorse in the final stages of exhaustion attended by a trainer and stable boy. Commissioned by the owner, Sir Henry Vane-Tempest, 2nd Bt (1771-1813) whose only child and daughter was later married to the 3rd Marquess of Londonderry, it shows the celebrated thoroughbred, Hambletonian (1792 - 1818) being rubbed down after the close match with Mr Joseph Cookson's Diamond at Newmarket on 25 March 1799. Exhibited at the Royal Academy, 1800, no. 222, 'Hambletonian beating Diamond at Newmarket'.

Shown moments after winning a gruelling race at Newmarket, this remarkable seven-by-twelve-foot picture depicts Hambletonian (1792-1818), one of most celebrated thoroughbreds of the late eighteenth century. The picture was commissioned by the horse’s owner, Sir Henry Vane-Tempest (1771-1813) an estate-owner and MP for Durham whose lands included Wynyard Park, later inherited by the Marquesses of Londonderry. Hambletonian was born and trained in Shipton-by-Beningbrough, a parish approximately five miles northwest of York which was then part of the Beningborough estate (National Trust). He was bred by Yorkshireman John Hutchinson (1736-1806), a ‘self-made’ trainer of racehorses who, in 1776, established a stud on land leased from Giles Earle (died 1811), then owner of Beningbrough (discovered by Matthew Constantine, Cultural Heritage Curator, North Yorkshire). Foaled in 1792, Hambletonian was named after the historic epicentre of Yorkshire horseracing, the Hambleton Hills, which border the North York Moors. After successfully racing in Yorkshire, he was sold by Hutchinson in 1795 to Sir Charles Turner of Kirkleatham Hall, and in the following year by Turner to his neighbour Sir Henry Vane-Tempest of Wynyard Park. Stubbs’ picture commemorates Hambletonian’s triumph in a famous four-mile, two-furlong match against the thoroughbred Diamond, which took place on the Beacon Course at Newmarket on 25 March 1799. A competition between a northern thoroughbred and a southern, the match carried considerable cultural significance, Hambletonian’s win interpreted as a victory for the North (Wilkinson 2011). The odds on Hambletonian started at 5-4 and side-betting was estimated at between 20,000 and 30,000 guineas, Vane-Tempest wagering 3000 on his horse. The race attracted large crowds and ‘drew together the greatest concourse of people that ever was seen at Newmarket’, according to The Sporting Magazine. Reporters went on to write that during the race both Diamond and Hambletonian had been ‘much cut with the whip’ and 'severely goaded with the spur’, Hambletonian, ridden by the jockey Francis Buckle, ‘shockingly’ so. He would win by a dramatic last-minute effort. The scene is set in the quiet privacy of a field, away from the braying crowds and spectacle of the race. It shows Hambletonian’s handlers tenderly and purposefully attending to the animal’s body, strained and hot after an intense competition. Signs of stress and fatigue subtly unsettle the portrait: Hambletonian’s nostrils are flared, his mouth is open over the bit, teeth exposed, his ears are flat back, his neck is extended as if he were still racing, and his hooves paw skittishly at the ground. The man in the top hat – possibly Thomas Fields (1751-1810), who trained Hambletonian for Vane-Tempest at Silvio House in Richmond, North Yorkshire – holds the reins to steady him, as a stable boy rubs down his body to soothe the muscles and wipe off sweat and blood, though the lashes of the whip and spurs have not been portrayed. A powerfully empathetic portrait, Stubbs captures Hambletonian’s magnificence and nobility but also reveals the physical and psychological sacrifices borne by the animal for sport. It is, of course, a bravura performance in equine anatomy: the bulk and contraction of Hambletonian’s muscles expertly highlighted with gleaming perspiration. From the mid-1750s the artist devoted himself to the study of horses and conducted rigorous investigations into their musculoskeletal composition, studying from life and from écorché or flayed carcases. He published Anatomy of the Horse with his own etched plates in 1766. Vane-Tempest had originally commissioned two paintings of Hambletonian. The pendant – unexecuted and known only through a lost drawing and a later painted copy – was intended to show the horse with its rider Francis Buckle. He had also planned to capitalise on Hambletonian’s success by issuing engravings after Stubbs’ pictures, but these too never materialised. In the event Vane-Tempest refused to pay Stubbs the agreed fee for ‘Hambletonian, Rubbing Down’, forcing the seventy-five-year-old artist to take his twenty-eight-year-old patron to court. The judge ruled in Stubbs’ favour, and all ties were severed. The breeding of thoroughbred racehorses was developed in England in the seventeenth and eighteenth centuries and involved crossbreeding native mares with stallions of Arab, Barb or Turkoman origin. Their foals were known for their speed, stamina and agility, and their beauty. As Nicholas Clee writes, ‘thoroughbreds were ideal reflections of the Georgians’ relationship with the land and nature in general – a nature that they, as enlightened individuals, owned and regulated’ (Clee in exh.cat. George Stubbs: 'all done from Nature' 2019, p. 53). Hambletonian died in 1818 and was buried in the grounds of Wynard Park. The painting hung there before being sent to auction at Christie's in 1853 (Casement 2007). It was brought back by Frances Anne, Marchioness of Londonderry and later removed to the family's London residence, Londonderry House, in the late 19th or early 20th century. It hung in the Library there until 1937 when, upon the death of Edith, Marchioness of Londonderry, it was inherited by her daughter Lady Mairi Bury and taken to Mount Stewart before 1962 (Hyde 1937).