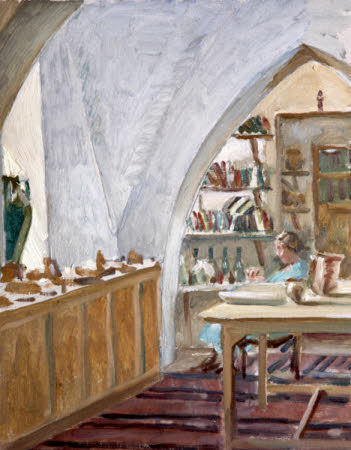 Oil on canvas on backboard

Agatha Christie is seated in an arched interior which looks like the expedition house at Chagar Bazar, Syria, where she spent time with her husband, the archaeologist, Sir Max Mallowan from 1932–7. In his memoirs Max mentions this painting of Agatha seated in their dining-room, mending the pottery and looking a picture of happiness. Agatha was actively involved in archaeological digs in Cairo, Damascus and Chagar Bazar. She wrote a memoir, 'Come Tell Me How You Live', in which she describes her experience in Iraq and Syria at archaeological digs. Some of Max’s colleagues were opposed to Agatha's involvement in these digs because she was a woman. Despite this, she helped finance expeditions and she documented sites. She also cleaned, classified and photographed artefacts. The collections at Greenway feature some of these archaeological finds.

Oil painting on canvas on backboard, Agatha Christie (1890 - 1976) surrounded by Objects by Dora Collingwood (1886-1964), also called D. S. Altounyan, circa 1932 - 37. A painting of seated female figure, seated surrounded by objects in an arched interior. The artist, Dora (Dorothy Susie) Collingwood was the daughter of Ruskin’s biographer, W. G. Collingwood and Edith Mary Isaac, also an artist, from Coniston in the Lake District. She married Dr Ernest Haig Riddell Altounyan, an Armenian surgeon and lived in Aleppo in Syria in the 1930s. Their five children were the inspiration for Arthur Ransome’s 'Swallows and Amazons'.