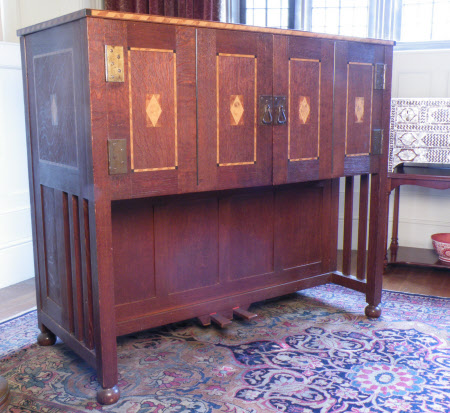 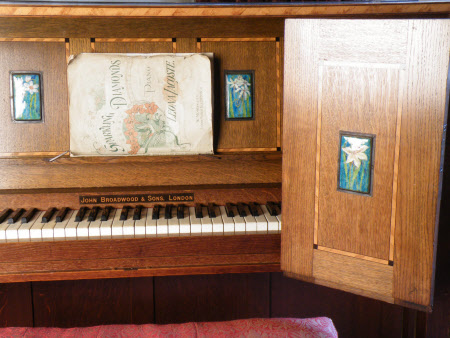 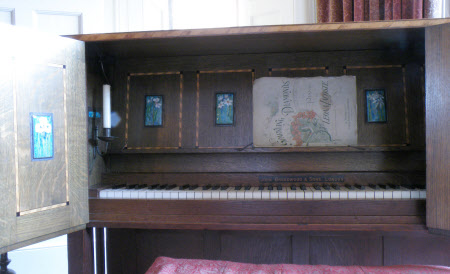 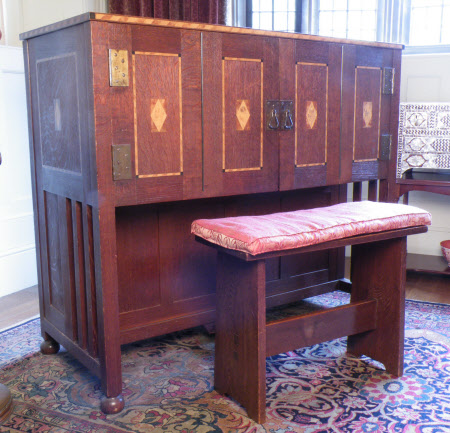 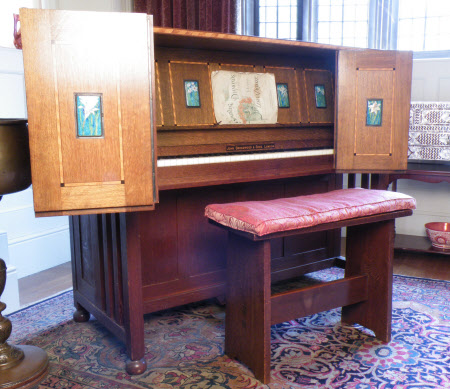 A 'Manxman' piano, made by John Broadwood & Sons, designed by C.R. Ashbee, 1903. The keyboard encased in an oak cabinet with a pair of folding doors which have brass handles and large rectangular hinges, each door with twin chevron-banded panels centred with a floral filled lozenge set into a rectangle, the edge of the top also chevron-banded, inside the doors and above the keyboard there are further chevron-banded panels which are centred with polychrome floral enamel plaques and there is a candelabrum at each end, just above the keyboard are the inlaid words JOHN BROADWOOD & SONS. LONDON, the sides of the piano have slatted lower sections and stand on bun feet. The piano is named after the designer of the prototype M.H. Baillie Scott (1865-1945) who lived on the Isle of Man.

Charles Robert Ashbee (1863-1942) was a founder member of the Guild of Handicraft, formed in 1888. Initially based in the East end of London on the Mile End Road, it moved to Chipping Campden in 1902. Ashbee designed most of the furniture that it produced. After commissions in Germany and Hungary, there was widespread admiration in Europe for its products. However, it closed in 1907.

The instrument, which bears the serial number 97066, was made at the Horseferry Road workshops of John Broadwood & Sons Ltd and finished on 3 October 1903. Described in their records as a "number 8 boudoir upright pianoforte, oak case to pattern, inlaid with interior of oak stained green to Mr Ashbee's design". It was sold to the Guild of Handicrafts Ltd at a full retail price listed as £65. Delivery of the instrument was not to the Guild's sales premises, however, but to a Mr E. Marsh of Coombury Cottage, Kingston Hill.