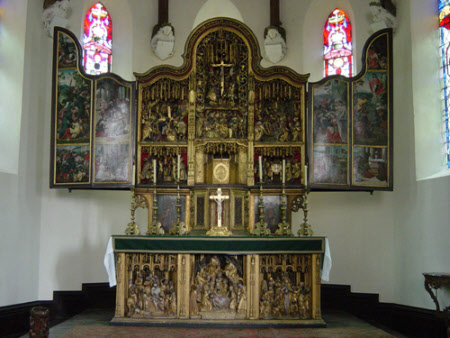 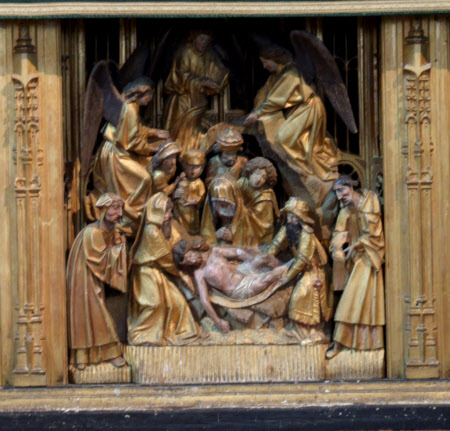 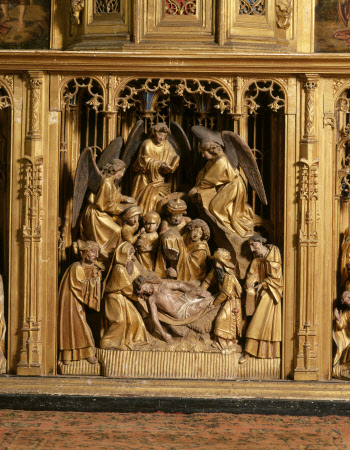 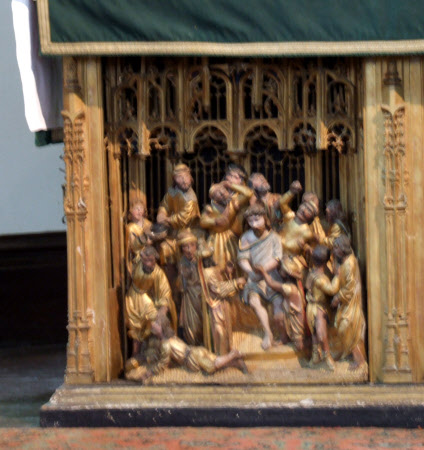 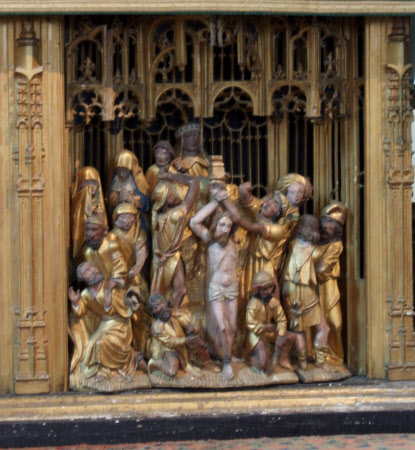 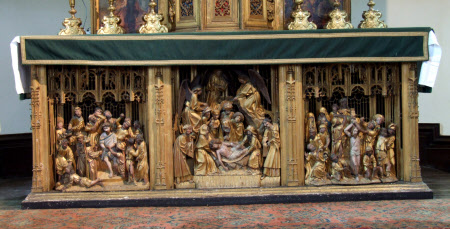 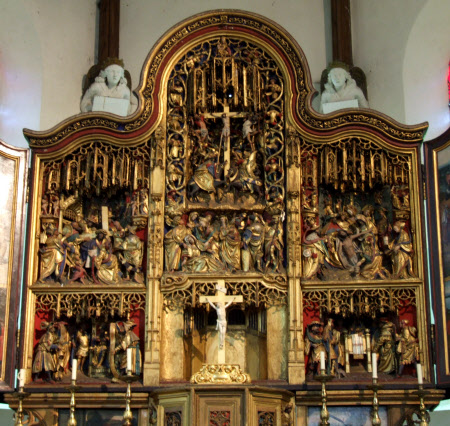 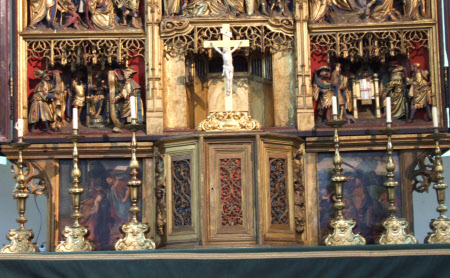 The Oxburgh retable or altarpiece was acquired to adorn the 19th century Chapel, celebrating the Bedingfelds’ Catholic faith. It was only after the relaxation of laws against Catholicism that such an imposing object could be displayed.

The Oxburgh Retable, a composite altartable, Flemish, second quarter of the 16th century with painted panels, almost certainly by Pieter Coecke van Aelst (1502-1550) who entered the Antwerp Guild of Painters in 1527, inscribed on the hems of two of the garments of the figures: MOREA, and YOLRWORPIN.

The ‘hand’ mark of Antwerp is stamped into several of the carved sections of the retable, and its ‘burcht’, or castle (guaranteeing the quality of the polychromy), appears twice below the hinges of the painted wings. Made up of a carved triptych showing scenes of the Passion and from the life of St James of Compostella. Enclosed by painted wings which act as doors, resting on a carved and gilded altar-table and tabernacle. Of three elements - at the bottom, the altar table carved on the front with The Mocking of Christ, The Deposition and The Flagellation. In the middle, a semi-octagonal sacrament tabernacle, flanked by panels painted with scenes from the life of St Catherine. At the top, a retable or triptych, probably made in Antwerp in 1520-1530. The carved scenes depict, in the centre, The Crucifixion, flanked by The Road to Calvary and The Deposition. In the lower register are Pilate, and possibly Caiaphas. The painted wings show more scenes from the Passion story and from the life of St James of Compostela on the inside and on the outside the four Fathers of the Church. A wooden and metal armature has been installed by NT to ensure structural stability with the wings open. The tabernacle was originally topped by a tall pinnacled 'exposition throne' or aedicule set against red curtains, this was replaced in the 1860s by the retable. (James Weedon 2017)

Made for an unknown location; reputedly acquired by Sir Henry Bedingfeld, 6th Bt (1800-62) in Bruges, where his sister was a nun for nearly fifty years but possibly really obtained (like some of his furniture) by him from the Belgian woodcarver (responsible for the added figures?) and dealer, Malfait, to replace the upper part of the neo-Gothic tabernacle originally installed in the Chapel when it was built (1835-37); or even by Sir Henry Bedingfeld, 7th Bt (1830-1902), since the widow of the 8th Bt - yet another Sir Henry (1860-1941) - claimed that her husband remembered its arrival at King’s Lynn [which has caused Christa Grössinger to say that it was bought in King’s Lynn in the 1860s - this seems the most probable, since it seems unlikely that the 6th Bt, who had only had the tabernacle made less than thirty years before his death, should have swept it away so soon; it is still visible in Matilda Bedingfeld’s watercolour of the interior of the Chapel, done shortly before her marriage to Captain Neville in 1855]; thence, by descent, in situ, until bought by the National Trust in 1982, with the aid of grants from the National Art Collections Fund, The National Heritage Memorial Fund, and the Victoria & Albert Museum-administered purchase support fund