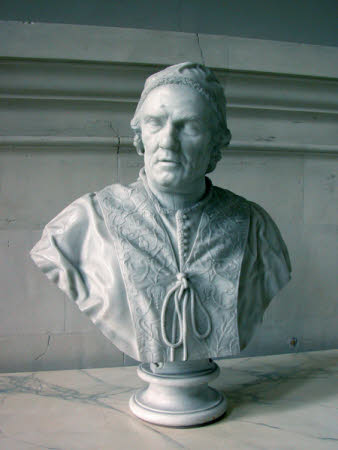 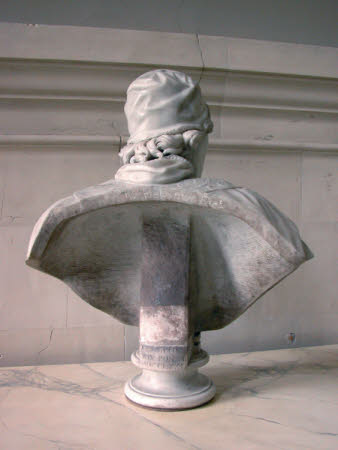 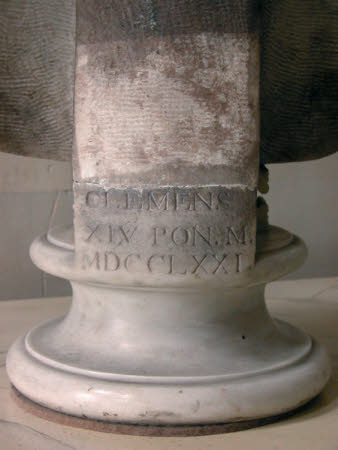 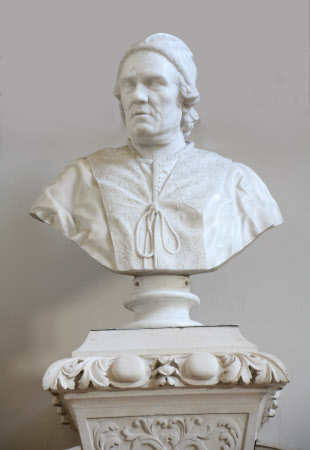 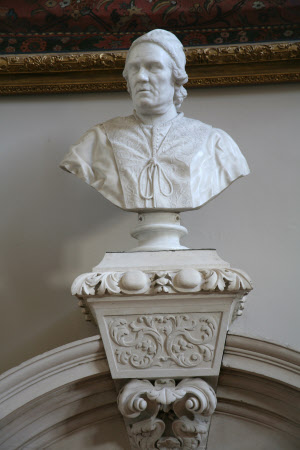 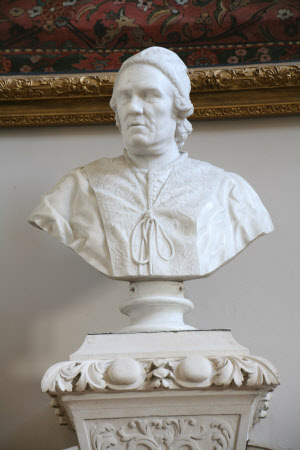 When did the word ‘condescension’ take on a pejorative meaning? One asks because it appears in correspondence related to this marble bust of Pope Clement XIV which was brought to England in 1771 by Mr and Mrs Earle of Beningbrough Hall. The couple had been travelling in Rome when Mrs Earle, feeling unwell, received papal permission to rest in a convent. Her husband later wrote that the Pope had 'shown us many marks of the most condescending distinction'. Mr Earle presumably bought this bust as a memento of what was for him, clearly a pleasant encounter. Clement XIV, pope from 1769 to 1774, was described as a man of formidable physique, and the present sculpture attests to this. The sculptor, Christopher Hewetson, skillfully conveys the Pontiff's fleshy, lined features and discerning sideways glance. He is most certainly an imposing presence. Hewetson was born in Ireland but spent his career in Rome in the circle of neo-classicists. His busts of Clement XIV, of which this is the earliest of four versions, were acquired by Grand Tourists, often on the advice of the Scottish neoclassical painter and antiquities hunter, Gavin Hamilton. Clement XIV planned but did not live to carry out a radical extension of the Vatican Galleries and acquired much of the antique statuary for it from Hamilton. It was almost certainly through him that the pope was introduced to the Irish sculptor. The aforementioned Mrs Earle, née Margaret Bourchier, was the niece and heiress of John Bourchier, who completed Beningbrough Hall in 1716. The Earles were in Rome from 1770 where they stayed at Cardinal Albani’s villa in the town of Castel Gandolfo where the pope also had a summer palace. Perhaps they had the occasion to enjoy papal condescension on more than one occasion.

White marble sculpture, Pope Clement XIV (Giovanni Vincenzo Antonio Ganganelli, 1705-1774) by Christopher Hewetson (Thomastown 1737 - Rome 1798), inscribed and dated Clemens XIV Ponti MDCCLXXI, Rome 1771. Hewetson, born in Ireland, lived in Rome from about 1764 until his death and was friendly with the neo-classicists. This is the earliest of four known versions, all now in Britain (one in V&A signed and dated 1773 from Margam Castle, Glamorgan) it was probably acquired by Giles and Margaret Earle - niece of John Bourchier who built Beningbrough Hall - in Italy in 1770/1, possibly on the advice of Gavin Hamilton, principal dealer (along with Thomas Jenkins). They bought it after the pregnant Mrs Earle received special papal permission to spend time in a convent, on which subject her husband wrote that the Pope 'has shown us many marks of the most condescending distinction'.