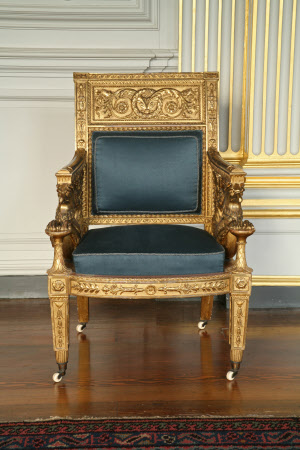 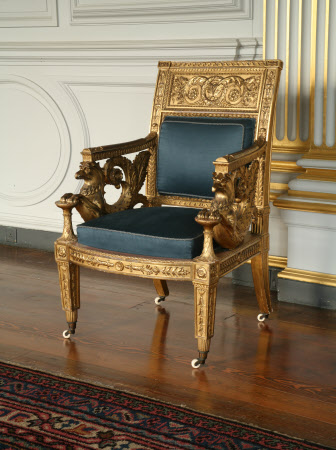 This bold and impressive chair was originally part of a set of seventy said to have been a gift from Napoleon to Cardinal Fesch.

An open armchair from a set of four pieces of giltwood seat furniture, designed by Dionisio Santi (b.1784-86) and Lorenzo Santi (1783-1839) for Cardinal Joseph Fesch (1763-1839), probably for his Roman embassy, the Palazzo del Buffalo-Ferraioli in the Piazza Colonna, circa 1806. Comprising four open armchairs and nine side chairs (NT 1190861). Each chair with a thick padded back and seat panel within a profusely carved frame, the back with a panel carved with a wreath and scrolling floral sprays with flowerhead medallions, the arms carved with acanthus tailed griffins raised on square section legs with bell flowers, each chair numbered with Roman numerals chisel stamped to the seat rails. Later fitted brass and ceramic castors, later upholstery.

This seat furniture is part of a larger set made for Napoleon I’s uncle, Cardinal Joseph Fesch (1763-1839), probably for his Roman embassy, the Palazzo del Buffalo-Ferraioli in the Piazza Colonna. From a design of circa 1806 by Dionisio Santi (b.1784-86) and/or Lorenzo Santi (1783-1839), as published in the former’s Modèles de Meubles (1828), the exact number of pieces from the original set is unclear but was in excess of ninety, most of which were recorded in an inventory, dated 1815, of Fesch’s Parisian Hôtel Hocquart de Montfermeil; the suite comprised chaises, fauteuils, canapes and causeuses. Within this number were at least three stylistic variations: a suite with triangular pediment, another with arched pediment, and an ‘acanthus-tailed griffin suite’ see: Lucy Wood The Upholstered Furniture in the Lady Lever Art Gallery, (vol. II, New Haven and London, 2009, p. 744). The furniture was sold at auction in Paris from the Cardinal’s house in 1816. (James Weedon, November 2019)

On loan from 1979 and then gifted to the National Trust by the 10th Duke of Atholl (by Lady Muriel Mildred Elizabeth Murray d.1961) on the 1st January 1982. The furniture is thought to have been purchased from the sale of Cardinal Fesch's effects on 17th June 1816 in Paris by the 10th Duke's grandmother, Lady Murray, daughter of Philip Beresford-Hope and wife of Sir George Murray.