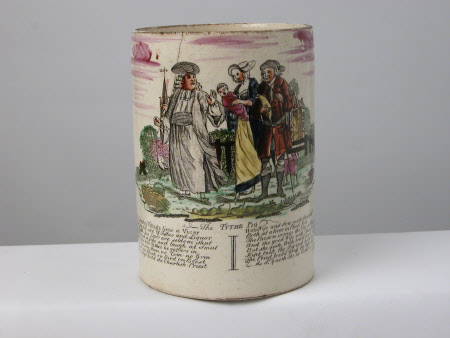 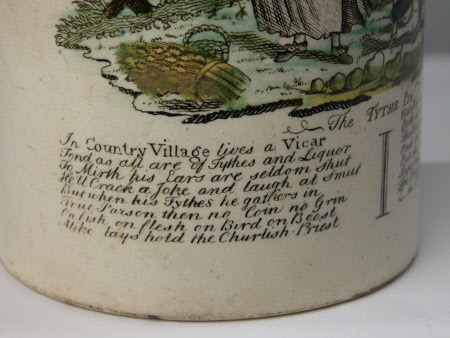 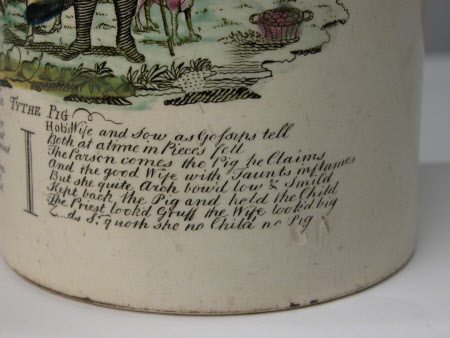 This creamware mug dates to the late 18th century and is an example of transfer printed decoration. Creamware is a type of earthenware with a lead glaze which was perfected by the potteries of Stoke on Trent in the 1750s. It is a very fine material but also light and glossy which made it ideal for decorative but useful (domestic) wares. At around the same time, the technique of transfer printing on ceramics developed which involved applying printed transfers to pieces. This greatly increased the amount of decorative wares that could be produced with patterns printed in multiples rather than individually painted. Some pieces combined methods as in the case of this mug where the black transfer print has been supplemented with enamel colours over the top. One of the results of the ease in which transfer printed creamwares could be produced was the speed in which potteries could react to decorative trends, consumer demands and also political events. The potters of Stoke on Trent often printed ceramics with political or commemorative messages, taking from the variety of political and satirical prints that were widely available in the 18th century. This mug is an example of this, reproducing an engraving by Louis Philippe Boitard first published in 1751 which illustrated the contentious issue of tithing. This was the practice of having to give (or tithe) 1/10th of all income to the church. Boitard’s print takes a satirical view of this practice and depicts a farmer and his wife giving their 10th child to the vicar. This print became very popular and was adapted and used by a number of potteries for many centuries afterwards. Derby also created the scene in porcelain and later, in the 1800s, Staffordshire factories followed suit recreating it in earthenware. One of these earthenware versions is also in the collection at Greenway (NT 120827). (Alison Cooper, 2018)

Introduced to the Property by Agatha Christie Mallowan, 1942.

The Tythe Pig In Country Village Lives a Vicar Fond as all are of Tythes and Liquor To Mirth his Ears are seldom Shut He’ll Crack a Joke and laugh at Smut But when his Tythes he gathers in True Parson then no Coin no Grin On Fish on Flesh On Bird On Beast, Alike lays hold the Churlish Priest Hob’s Wife and Sow as Gossips tell Both at a time in Pieces fell The Parson comes the Pig he claims And the good Wife with Taunts inflames But she quite Arch bow'd low & Smil'd Kept back the Pig and held the Child; The Priest look’d gruff the Wife look’d big, Z…ds S. quoth she no Child, no Pig