The Idolatry of King Solomon 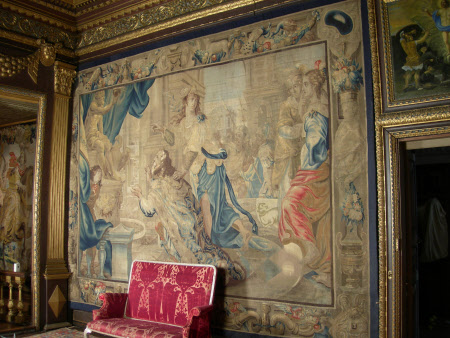 Tapestry, wool and silk, 7 warps per cm, The Idolatry of King Solomon from a set of two of The Story of Solomon, Michiel Wauters, Antwerp, c. 1660-1679, after a design by Abraham van Diepenbeeck. King Solomon, wearing a richly brocaded blue and gold robe and a heavy jewelled necklace, kneels with his arms raised in veneration before a raised altar on the left hand side, his sceptre and crown/turban beside him on the steps of the altar. The altar is round and decorated with rams’ heads and swags of fruit and bears a golden statue of Jupiter seated and holding aloft a chalice with a golden eagle by his side. Behind Solomon one of his wives, richly dressed in a gold-edged chemise over a blue dress, a blue cloak with a jewelled clasp, and patterned cloth and jewels in her hair, rests a hand on Solomon’s shoulder, encouraging him in his idolatry. She looks back to the right of the tapestry where two more wives look on. The scene takes place on a platform with a patterned marble floor. In the background on the left are marble walls with columns, and on the right a group of armed men with an open view to large classical buildings beyond. The vertical borders are composed of herms decked in flowers, and the horizontal borders each have a carved golden altar in the centre with lambs and goats either side at the top and at the bottom parrots and cornucopia filled with fruit.