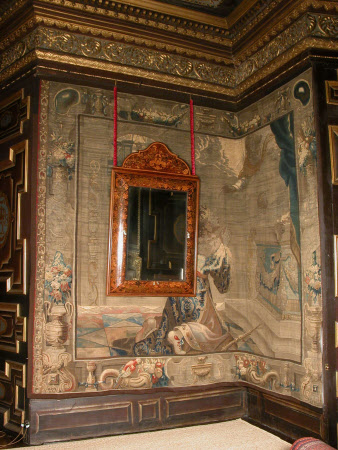 Tapestry, wool and silk, 7 warps per cm, King Solomon at Prayer from a set of two of The Story of Solomon, Michiel Wauters, Antwerp, c. 1660-1679, after a design by Abraham van Diepenbeeck. King Solomon kneels before an altar in prayer to God who appears in a cloud at the top right, accompanied by two cherubs' heads. Solomon wears a richly brocaded blue and gold robe with an ermine mantle over his shoulders and a skirt edged with large jewels, laced shoes with red details, a heavy jewelled necklace and a golden crown. He clasps his hands in prayer, his sceptre resting on a step in front of him. The square altar is blue with gold decorations of swags and carved rams’ heads at the corners, and a small flame indicates a burnt offering on the top. The setting is a lavishly decorated interior with coloured marble floors and columns. The scene is framed on the right by a blue curtain with a gold fringe. The vertical borders are composed of herms decked in flowers, and the horizontal borders each have a carved golden altar in the centre with lambs and goats either side at the top and at the bottom parrots and cornucopia filled with fruit.