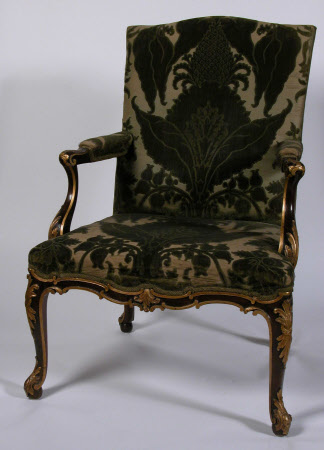 This George III (c.1760) armchair is covered in a green velvet Pears pattern. The textile was designed by G. F. Bodley as part of his design scheme for the Oak Drawing room when he remodelled it in 1907. The fabric was supplied by Watts and Co., the pattern of which is still in the company's design books.

An open armchair from a set of eight pieces of mahogany and parcel gilt seat furniture, in the manner of Paul Saunders (1722-1771) or William Bradshaw (d.1775), London, circa 1760.Comprising a sofa, three open armchairs and four side chairs all upholstered in green cut velvet designed by George Frederick Bodley in 1874 for Watts & Co.Each piece fully upholstered to the back and seat, the seat frame carved with C scroll designs centred by a leaf spray, the cabriole legs leaf carved and terminating on a scrolled foot.

The design of this set of furniture bears a close resemblance to a suite supplied in 1757 for the 1st Earl of Leicester at Holkham Hall, Norfolk by the cabinet-maker, upholsterer and ‘Tapestry Maker to His Majesty’ Paul Saunders; ‘Mr. Saunders for 10 Elbow chairs with carved and gilt frames and covd. Cut blue Turkey leather £74. 0. 5.’ And with ‘two large sophas’ en suite. Saunders was likely to have been introduced to Lord Leicester through William Bradshaw (d.1775), an associate who was recorded working at Holkham in the 1740s. A table sold Christie's, London 23.11.06 lot 60 demonstrates very similar carving to the frieze and cabriole legs.The table is attributed to Bradshaw who is credited with the manufacture of magnificent drawing-room seat furniture supplied both for the 4th Earl of Chesterfield's London House and for the Earls of Radnor, Longford Castle, Wiltshire. (James Weedon, March 2019)

Recorded in the 1944 Powis Inventory as ‘A set of three early XVIII century walnut and carved gilt square back open arm chairs covered en suite' in Oak Drawing Room. Part of the indigenous collection of Powis Castle accepted in part satisfaction of the Estate duty after the death of the Right Honourable George Charles, 4th Earl of Powis, on 9th November 1952. The contract of the 'Offer of Property in Satisfaction of Estate Duty under the National Land Fund Scheme' was completed on 21st March 1963. Conveyed to National Trust ownership in 1992.