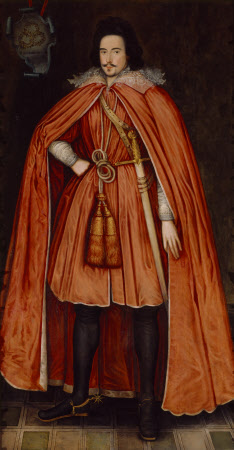 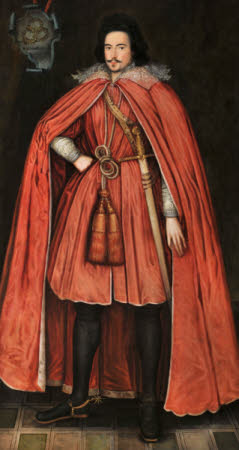 This portrait was probably painted shortly after Edward Herbert was made a Knight of the Bath by king James I in 1603. He later spoke with great pride of his robes of ‘crimson taffety…in which habit I am painted in my study’. The painter is unknown, though the formal construction of the portrait is reminiscent of the full-length portraits by William Larkin from the same period. Larkin was an English painter best known for his portrayals of members of the court of James I, which capture in brilliant detail the opulent layering of textiles, embroidery, lace, and jewellery characteristic of fashion in the Jacobean era.

Oil painting on canvas, Sir Edward Herbert, later 1st Baron Herbert of Cherbury KB (1581/2 – 1648), in the Robes of the Order of Bath, British School, c.1603, inscribed on cartouche, upper left of canvas: VIRTUS SIBI PRAEMIUM; on back of canvas, freehand in oil: Edward/Lord Herbert/of Chirbury/K.B. A full-length portrait of Edward herbert wearing the crimson taffetta robes of the Order of the Bath.

Accepted by HM Treasury on 21st March, 1963 in lieu of tax and conveyed to National Trust ownership on 29th November 1963. The portrait is mentioned in his autobiography; The Life of Edward Herbert of Chirbury, published in 1771 'Shorty after I was being made Knight of the Bath... The second day to wear robes of crimson taffeta (in which habit I am painted in my study)'. Recorded at Powis Castle in Montgomery Collections Vol VI P.148 in 1873.