Capriccio of a Mediterranean Seaport with British and Italian Buildings, the Mountains of Snowdonia, and a Self-portrait wielding a Broom 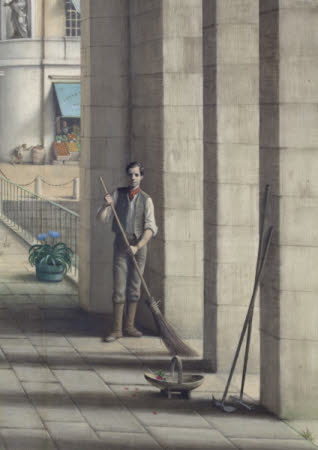 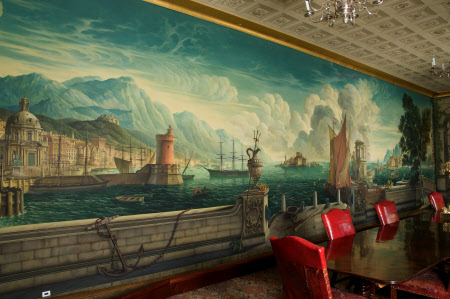 Oil on canvas laid down on plaster

This ambitious and fantastical mural, over 17.5 metres long, was designed as an imaginary view from the windows of Plas Newydd House in Wales, the country seat of Charles Paget, 6th Marquess of Anglesey (1885–1947). Paget commissioned the work (intended for his recently created dining room) in 1936 from the artist Rex Whistler (1905–44), a master of complex compositions that could deceive the eye. This European fantasy landscape encourages us to think we are standing at the edge of the sea on a paved promenade looking onto a stone jetty. In the distance is an impressive coastal town featuring Roman and baroque architecture, along with identifiable British buildings that unfold in dizzying urban confusion, all backed by the mountains of Snowdonia. This playful scene was one of Whistler’s great masterpieces, and he included a portrait of himself as a gardener with broom in hand (at the far end of the left-hand arcade).

Oil painting on canvas laid down on plaster, Capriccio of a Mediterranean Seaport with British and Italian Buildings, the Mountains of Snowdonia, and a Self-portrait wielding a Broom (Plas Newydd Dining Room Mural) by Rex Whistler (Eltham 1905 - Normandy 1944), circa 1936-37. A romantic coastal scene with a capriccio view; an imaginary scene with many architectural and personal references, including St Martin-in-the-Fields, Trajan's Column, the Round Tower at Windsor; and family referencess, including bulldogs, a pug, spectacles and a cello.

In 1936 Lord Anglesey commissioned Rex Whistler to paint what was to be his last as well as the most extensive of his large murals, more unified and more accomplished than his work in the restaurant of Tate Britain (formerly Tate Gallery), or his drawing-room at Mottisfont in Hampshire (NT). Whistler's first conception for the main wall seems to have been entirely different from the completed work - a townscape with figures seen through a colonnade - but the maritime setting of Plas Newydd, and in particular the views from this room, must have formed in him the notion of reflecting the dramatic mountain landscape of Snowdonia in a vast capriccio, which would at the same time embrace architecture, ships and the sea. The bones of the composition were sketched on to the bare plaster of the long wall before the artist began work on the giant canvas, woven in France, in one piece 58 feet long, of whose arrival in London the artist wrote to his patron, caused 'great amazement & interest in canvas & jute circles!' As a prominent stage designer, Whistler was able to secure the use of a theatre workshop in Lambeth where the great canvas could be raised and lowered in relation to the platform from which he worked. When it was largely completed, in June 1937, it was taken down to Plas Newydd and, with the two smaller canvases on the end walls, glued to the plaster. Whistler himself came in August and reworked some passages while supervising the decoration he had devised for the rest of the room with its gilded cornice, painted coffering in the ceiling and trophies in grisaille over the chimneypieces (inscribed with Christian names of the 6th Marquess and his wife). Much of the composition is purely imaginary, but there are numerous architectural and personal references. Of the former, the steeple of St Martin-in-the-Fields, Trajan's Column, the Round Tower at Windsor and the Roman church of S.Nome di Maria can be seen, the Italian buildings perhaps recalled from Whistler's time at the British School in Rome. The family appears in many guises: on the triumphal arch on the left is an inscription in 'dog-Latin' commemorating the 'founding of the city' by the Marquess, and his equestrian statue stands in front of it; at the far end in the 'gallery' (reminiscent of the Palladian bridge at Wilton) can be seen two French bulldogs and a pug, which belonged to lady Anglesey's daughters, as well as her book and spectacles. The 'baby' cello belonged to the 7th Marquess as a boy. In the centre of the main wall Lord and Lady Anglesey's arms are shown as if carved in stone on the ends of the parapet wall, and here too are Neptune's trident and crown carelessly propped up against an urn, and wet footprints leading up the steps from the sea - as if to suggest that the sea-god himself had joined the family at the dinner table. Almost by way of a signature, Whistler added in the arcade at the other end the figure of a young man sweeping up rose petals (a reference to his love for Catherine Paget) - this is a self-portrait, the last one before his death in action only a few years later.